Our current baseline DDF strategy takes 96 visits in various filters, for ~1 hour of observing. The DESC and AGN DDF strategies take much shorter sequences (the DESC gri sequence is ~13 minutes). Is this going to be an adequate length of time to identify/reject solar system transients? Do people care if they are able to reject solar system objects in the DDFs? Do solar system folks want to be sure they can detect moving objects in DDF sequences? @dscolnic @nielbrandt

It gets a but awkward if we need to return to a DDF after 10 minutes to get another exposure to detect moving objects, but we can if we need to.

Here’s the plot that tipped me off that shorter DDF sequences might be an issue. 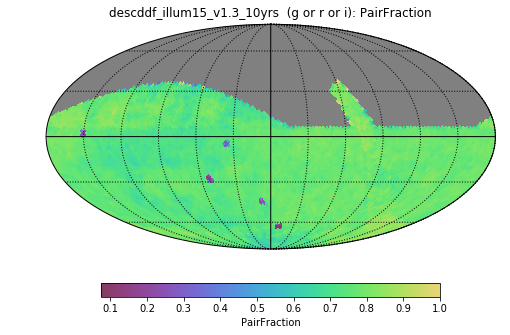 Our current baseline DDF strategy takes 96 visits in various filters, for ~1 hour of observing. => Can you clarify…this is per night?

Is this going to be an adequate length of time to identify/reject solar system transients? => Perhaps not from an individual image, but with many images, yes.

Do people care if they are able to reject solar system objects in the DDFs? => Absolutely.

Do solar system folks want to be sure they can detect moving objects in DDF sequences? => I assume yes, the DDFs will provide useful data for SSOs

Ah, to clarify the current baseline DDFs each take 96 visits in a sequence. The sequences are every 3 nights, but will execute more frequently if a DDF starts to fall behind (e.g., weather wipes out a few nights).

OK, I’m hearing confidence that SSOs can be detected from the shorter sequences.

The pair fraction plot just shows what fraction of observations taken in g, r, or i have another observation (in any of g, r, or i) taken 15-90 minutes earlier or later.

Yes. I think the fast moving SSOs will be removed from morphology (streaks). Slower moving ones will be more difficult, but probably can be identified based on other properties and/or from multiple images.

Peter, if you’d like to see the thinking of the AGN folks on the DDF cadence, please see https://arxiv.org/pdf/1811.06542.pdf - you may find Section 3.4 particularly relevant. Thanks, Niel

As an FYI (regarding the “can you identify SSOs in a DDF” part of the question):

This is a plot of the typical motion of a solar system object at a variety of semi-major axes, while on a circular orbit. 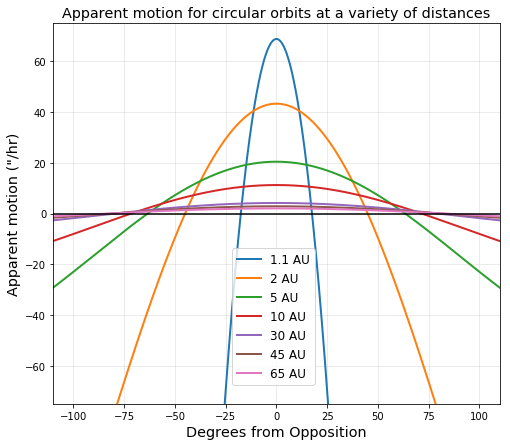 Assuming you can see that something is moving if it moves 1/2 of the PSF in the 13 minute sequence, (and that you have a PSF of 0.7"), you could detect something moving faster than about 2"/hr – so I’d expect you can pick out most moving objects if it’s visible for at least 10 minutes or so (across the different filters).

Note that all of this gets tougher away from opposition though - in the region where objects between 2-5 AU reach turnaround (so somewhere between 50-70 degrees from opposition), a 10 minute sequence is unlikely to pick up enough movement to distinguish asteroids from transients (for at least some slice of the Main Belt population). [opposition -> RA = LST at midnight … so in theory I think this translates to not avoiding DDFs when the LST at midnight is within 50-70 degrees of their RA]

Then again, most of the DDFs are not that close to the ecliptic, so the contamination from main belt objects ought to be fairly low except for those that are within ~30 degrees ecliptic latitude (and the population of everything else is just generally so much lower, I don’t think it will be a major problem).

Of course, this is all assuming you need to identify solar system objects from a single night of observations - if you only care about transients that are visible for multiple nights, this isn’t an issue because by then the asteroids will have moved on.