The four simulations here (called “v2.99” to emphasize that we are so, so close to v3.0 but these are still drafts) are:

The databases for these simulations are available for download at
https://s3df.slac.stanford.edu/data/rubin/sim-data/sims_featureScheduler_runs3.0/

This notebook contains a high level summary comparison of metrics between these runs (and comparing against the baselines from v2.0, v2.1, and v2.2). (and nbviewer is an alternate view option, if the original at GitHub keeps failing to render).

These simulations will be presented next week at the The Third SCOC-Science Collaborations Workshop, November 2-3.

Is there any paritcular reason by no_twilight_neo_v2.2_10yrs is missing from summary_2022_10_25.csv? The v2.2 baseline has no Vatira/ 'Ayló’chaxnim detections, so I was trying to find a non-v2.0 simulation to compare to.

Thanks. That makes sense. Maybe it should be in there for comparison to the neo twilight simulations for posterity, but again as it is not a baseline others won’t confuse it. Given SSP is only the moving object search tool currnetly that will be guaranteed to run on the LSST data, I am looking at the SSP metrics (3 pairs in 14 days), and the current v2.20 baseline has zero. Good to be reminded of the differences with no_twilight_neo_v2.2_10yrs . The v2.99 do better than no_twilight_neo_v2.2_10yrs, much better than the 2.20 baseline in this context.

Is this something about the combined suppress visits and long gaps combining, and one of these could be relaxed (like how often log gaps run)? 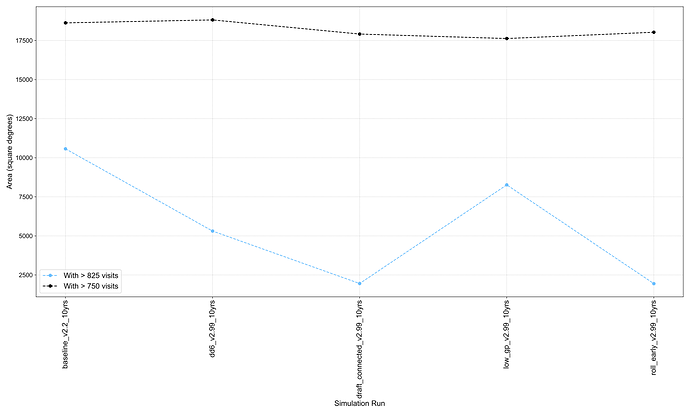 The Tgaps metric went up by a factor of 2 because the initial value was incredibly small. The long gap visits mostly happen in the WFD, so changing how often it runs shouldn’t change the total number of WFD observations.

Right - we picked a relatively small “nights off” value (nights off 6) which showed in the previous long gaps simulations only a very small impact on the overall number of visits. I don’t think this is reducing number of visits in the WFD by a significant amount (<1%).

The drop in visits in (the low-dust) WFD is being primarily driven by the increased time in DDFs (~2.5%), the addition of the twilight NEO micro survey (~2.5%), and to some extent, a larger area in the galactic plane WFD (maybe ~1/1.5%?). None of these visits are entirely redirectable to “anywhere on the sky”, although they can be within a limited RA range. Overall we’re seeing a decrease of 5-6% in the median number of visits in the WFD (depending on which run you compare to), which is consistent with the impacts we saw with each of those individual changes in previous runs.

For these kinds of comparisons, I usually find the median number of visits per pointing (evaluating the ‘best’ 18,000 sq deg) tends to scale much more linearly as visits are redirected to ‘other than WFD’ purposes, because the “typical” number of visits scales relatively slowly; the same is mostly true of the minimum number of visits per pointing. However, the area which receives at least X visits tends to show more dramatic changes, because we do cover the WFD area fairly uniformly (not entirely, but mostly) and so when one point on the sky falls below the threshold X, large chunks of sky usually follows fairly quickly.

Thanks. This is helpful.
~Meg 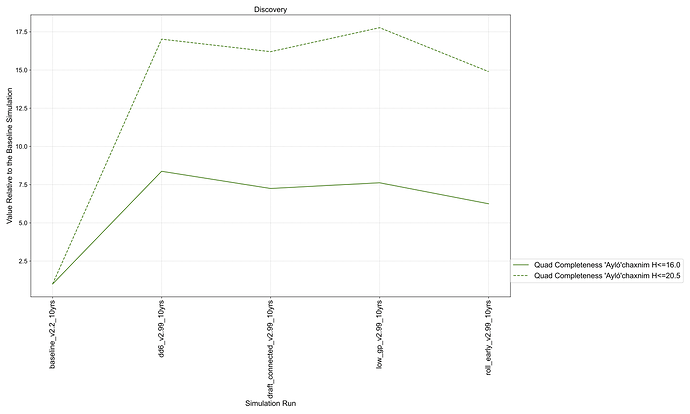 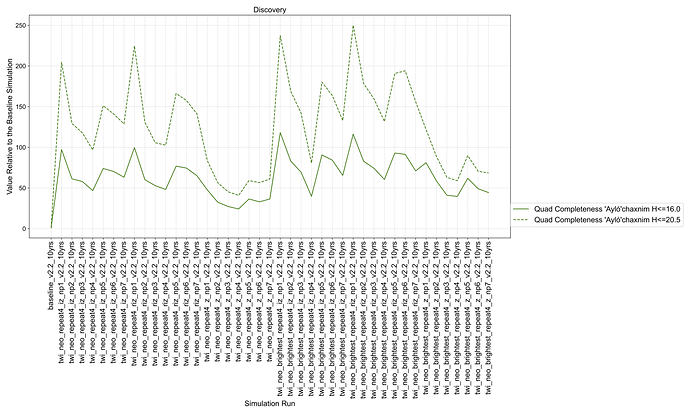 I realized that the twilight_neo micro survey in v2.99 is only using morning twilight, and not morning + evening (as it was in v2.2). This was one of the suggestions from the SCOC as a possibility, but wasn’t what I had originally thought was implemented, so hadn’t brought it up earlier. This definitely has an impact on the discovery rate. None of the v2.2 runs used morning twilight only.

I’ll communicate this to the SSSC. Thanks for looking into it. Is this change because evening and morning twilight would be ~5% of the time and there’s not 5% to give to that?

To be honest, I am not sure.
I think this is something (along with swapping the u/z/y filters with lunar cycle instead of just u/z and changing the DDF sequences to something like either quads or the accordion cadence, as well as tweaks to the filter balance in the galactic plane and south celestial pole regions) that we will have to add some extra work into checking before we can finalize a v3 simulation.

There was mention last week that there was a bonus v2.99 simulation with a twilight near-Sun survey that was both morning and evening twilight. I am not sure what the name of that simulation is. Are the metrics from that simulation available? Many Thanks.

The bonus simulations that were run at the time of the workshop still had the near-sun twilight survey only operating in morning, rather than both morning and evening.
I’ve just run (over the weekend) one which does take place in morning and evening, at the same level as twi_neo_brightest_repeat4_riz_np4.
I can send that along to you, or rather maybe what I should do is send along an example of the metric output – but I will say, I think we still have work to do as the time needs some redistribution from where it’s ended up when running near-sun twilight at both evening and morning. Mostly, I would like to verify that we get the expected 'Aylò’chaxnim performance when running like this, while also swapping z and y band, and taking the rest of the visits for other parts of the survey (DDF running at 7.5%,etc).