Hi all, I have recently started at RAL as a Scientific Computing Graduate in the Tier-1 group where I’m going to be curating and serving astronomy survey images on the Echo (S3) Object Store. I thought it would be a good idea to create a brief tutorial on the data butler’s command line tasks and the lsst.daf.butler python module for anyone to use or for anyone to correct me if I’m using any module incorrectly. Please find the notebook attached below.

Thanks for this. I have a few questions (noting that I manage the butler development)

Thank you for the feedback. This is very appreciated especially because you have first hand experience developing the code.

I haven’t seen anyone configure a butler like this before so I had not spotted that if you specify a sqlite file explicitly in a path that is outside the butler root then we will not create the sqlite database. I’m not entirely sure if we should be creating it. If you are using an entirely local butler then we do create it automatically. Most people using S3 are using postgres

Why are you copying the gen2 _mapper file into the gen3 repo? It’s not used by gen3 and gen2 can’t use S3.

In your notebook, (the line 79) the dataset types returned there are the curated calibration dataset types. You use butler write-curated-calibrations to add those but butler convert will also do it for you.

If you just want all the raw files copied locally then export is more than you need because it tries to give you additional data files to allow an import later. You should take a look at butler retrieve-artifacts and associated Butler API. For raws you can do the ingest again and get the same answer without having the associated metadata from the yaml file so retrieving and ingesting again should be the same as exporting and importing.

“auto” for transfer in S3 should always do a “copy”. It uses the default best suited for the URI scheme. We use “direct” for raws because we put raws in a special bucket which gives us the ability to destroy the user bucket and redo things from scratch without having to delete the raws. 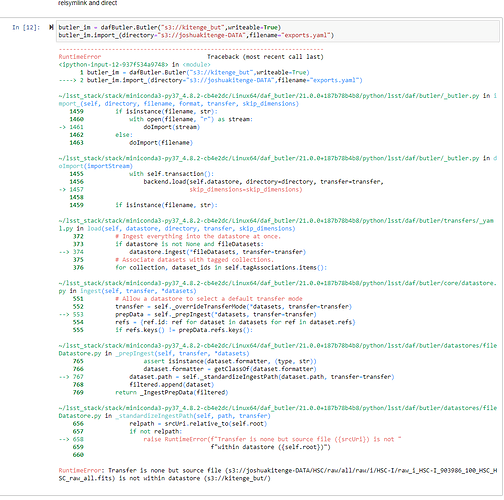 Thank you again for all this feedback. I’ve went over my notes and I’ve corrected all of my mistakes.

Use transfer="auto" and it will mostly always do the right thing. The butler import command line does this. Unfortunately the Butler.import_() API was developed before auto existed and so defaults to None (which means “the files are already in place so no transfer needed”).

We recently reduced memory overhead for raw ingest by grouping. Some of this will depend on which version of the pipelines code you are using. I don’t know as we’ve ever done a conversion using such a small memory machine. Maybe @jbosch has some thoughts on memory usage since he did the big conversions at NCSA.

Is there is a better method for downloading the rerun directory between two systems (e.g HPC at location A to S3 at location B) than exporting and importing the data??

Are you talking about gen2 reruns at A to gen3 S3 in B? That has to be done through butler convert – we always convert locally into fresh repos because it’s a lot more efficient to do a bulk s3 copy after the conversion. Once you have a gen3 repo the only option at the moment is to do export/import. I am currently finalizing a butler transfer-run command that will do this in one go.

I have a couple questions.

There isn’t an “export all” that takes all the dimensions, datasets, dataset types, collections and other items and dumps them somewhere. In sqlite it’s easier to copy the datastore and sqlite file to a new location so it’s been a relatively low priority. Now that we have to write a command to migrate from the old integer dataset IDs to the new UUID form using sqlite then we will have to have something that looks very much like “export all”.

and also does the import_ function support parallel uploads ?

The low-level ButlerURI.transfer_from() API is currently not async-aware. Slow transfer speeds have been coming up recently so it’s definitely something I want to look at.

An alternative approach for raw ingest is is to do something like:

Doing it this way means you can set up multiple butler repos in S3 (and also delete them) without having to continually upload the files from local disk.

For an import/export you should be able to export from a repo to an S3 bucket and import from an S3 bucket. I think boto3 still downloads each file to the client as part of a copy so it’s not great performance (but maybe since I last looked at this boto3 has got cleverer).

Now for some comments on the web page:

There are a couple of recent commands that might interest you (they have Butler APIs to match):

Also, forgot that I was meant to cc @MelissaGraham in case she has not seen this discussion (she’s also working on butler documentation).

Thanks @timj for the comments. I resolved most of the comments in my latest draft of Generation 3 Butler notes. Which is attached above in HTML (.html), Notebook (.ipynb) and PDF (.pdf) format. I didn’t address the visit system as I don’t understand how it will differ for LSST.

In gen2 visit was effectively the fundamental concept of an observation and the all the instruments treated visit as being a synonym for exposure or observation.

In gen3 we separate the two concepts so “exposure” means one self-contained observation that could be processed on its own, and “visit” is effectively a scheme for grouping exposures.

In gen3 we currently have two “visit systems” in place and they are set up after the raw data have been ingested. The two are either “one visit == one exposure” or else create visits by using the “group name” – we put a groupId header in each file so we can tell if the observing script has decided that the two exposures should be processed together. We haven’t really fleshed out this process because we’ve never really taken any multi-exposure visit data (LSSTCam is required to support two exposure visits or one exposure visits). All the current pipelines assume a visit is a single exposure and there is a step in the pipeline that morphs the exposure into a visit. All the pipelines require that visits are defined so after ingest if you are wanting to use our standard pipelines you will need to run butler define-visit.

Thanks @timj . I have added that to the tutorial as well brief guide to how to use the define-visits command line task.