In it are presented metrics discussing the impact of the Twilight Survey on other Solar System science as found in survey simulations run by Lynne. A number of survey strategies and filter combinations are discussed. Some strategies include using a few filters (g, r and i) to the full amount of LSST filters. It appears from slides 9, 10 and 11 that having fewer filters provides favorable results in affecting other Solar System science.

My question is, would the effect on other science be even more favorable if we stuck to one filter in the Twilight Survey such as a red filter with high throughput like the r filter?

Also, Lynne, can you tell me how many sq. degrees that are covered in a given Twilight Survey session? Also, is it possible to adjust the Twilight Survey cadence to cover smaller solar elongations than 45-60 degrees?

As seen in the attached plot showing the aphelion distance, Q (bottom X-axis), and maximum solar elongation distance plot of the population of inner-Venus objects (IVO), the maximum solar-Elongation angle at which IVOs can be located in the sky is ~46 degrees corresponding to an aphelion of ~0.71 au.

The first known inner-Venus object, (594913) 'Ayló’chaxnim, has only a maximum solar elongation distance of ~41 degrees corresponding to an aphelion of ~0.65 au and was at about this distance when discovered by the Zwicky Transient Facility in January 2020.

Therefore, we will be barely scratching the population of IVO/ 'Ayló’chaxnim-like objects if we limit the Twilight survey to covering a minimum solar elongation distance of 45 degrees. 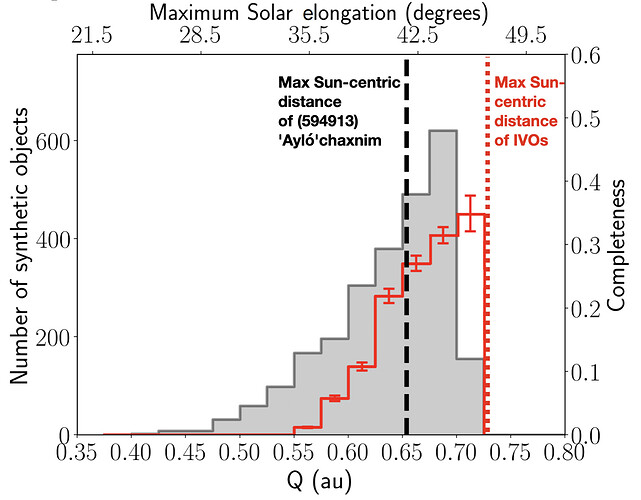 Summary from slack discussions with Lynne:

1.) One filter might be possible (g-band, r-band, though background in g during twilight is higher).

(see #solarsystem in the LSSTC slack).