It is mid-July and as mentioned in the June 2019 update, we have some new runs for you.

Book keeping:
This set of runs are labelled as “FBS 1.2”, while the previous set (June 2019 and prior) will be labelled “FBS 1.1”. In each version, we will re-run all of the previous still-relevant runs (so, at this point, all of them). This will make sure that we are comparing apples-to-apples when making comparisons between rolling cadence runs or various footprints, for example. However - at this point, we are NOT changing the names of the runs!

The version information is preserved inside the output database, in the “info” table, and is clearly labelled in the online MAF tables. At this point we’re only keeping the up-to-date runs online. Please let us know if this is going to create a problem for you – while we hope this will make it easier to keep straight which run is which within a set (instead of having runs identified simply with numbers), having the same names also adds a bit more burden on your end to make sure you have “baseline10yrs” from FBS 1.2 or FBS 1.1. At this point, I’d anticipate a set of FBS 1.3 runs in mid or end of August (hopefully before PCW, but likely not), and then we would likely have new releases of runs every two months or so.

FBS 1.2 runs
On to the fun stuff. The links below for this set of mid-July FBS 1.2 runs are to the databases at https://lsst-web.ncsa.illinois.edu/sim-data/sims_featureScheduler_runs/
They are also available at http://astro-lsst-01.astro.washington.edu:8081 – we will work on adding to the MAF outputs at that location. The MAF outputs are identified by the same run names as the DB links.

There is a lot to unpack there and we will be working on some more summaries of these runs before the PCW. In particular, looking at the general effects of the footprints and rolling cadences is high on our list, as well as the effects of the DD variations and filter options for pairs. We will have a short writeup regarding the filter swap timing soon, and I am also working on a writeup describing scheduling differences between opsim v3 and the new FBS (in particular, how the scheduler observes the sky on a given night).

Obvious items missing from the list of survey simulations above are mini-survey variations and galactic plane coverage variations, as well as a few more specific suggestions such as season extensions. These are still in the roadmap, but are not likely to be entirely complete before the PCW.

FBS 1.2 release notes
An important update taken in the FBS 1.2 runs is that we have increased our weather downtime significantly. Previous simulations had weather downtime on the order of 15%; comparison with SOAR and Gemini data indicate that this is within the range of downtimes, but is likely to be very optimistic.
Binned per-month, SOAR has downtime between 15% and 34%, while Gemini South provided a number of 915 downtime hours per year (about 30%). For this reason, we have decided to decrease the cloud cutoff in the cloud data we’re using, so that the survey downtime is about 32%, due to weather alone. This will overlap slightly with scheduled downtimes, but produces a notable decrease in the total number of visits expected. Please take this into account in your analysis!

The other important change is that the LSST throughput curves received an update to match as-measured curves for the lenses and CCD QE. This has improved the u band throughput, resulting in an increase in u band depth. We will note that there is a related bug we have found when calculating the total m5 depth per visit – currently the depth is always being calculated as if the visit was composed of 2x15s visits, even if it is a single 1x30s visit. This will be fixed in FBS 1.3 release, but it should be noted that the u and g band depths should be expected to increase slightly compared to the values reported in the FBS 1.2 runs as a result.

The value of the observationStartLST is used to calculate Hour Angle, so this means that HA’s calculated with MAF on FBS 1.2 are accurate (while for FBS 1.1 they were not … Opsim V3 runs for the white papers were also reporting observationStartLST in degrees, so HA values are correct for these runs as well).

A further comment on these runs and the intra-night cadence:

We use the blob method for most observations, and obtain pairs in g, r, i and z bands. For the typical “mixed filter pairs” visits, these pairs are in g+r, r+i, i+z - and then there are unpaired visits in u, y, and the remainder of the z band visits. The blob and greedy survey modes are currently applied throughout the survey footprint.

Inside the scheduler, the hierarchy for choosing what visit (or set of visits) to schedule next follows: special surveys, then blob surveys, then greedy surveys. The special surveys have specific triggers to control when they propose observations, while the blob surveys will (currently) request observations at any time that is not currently or almost (within the blob time requirement) twilight, leaving greedy surveys to operate only in twilight or within 30 minutes of morning twilight.

One additional late run being added, setting the footprint based on dust map extinction. We’ll add this to the other runs, but for those who want to grab it now (attn @willclarkson) https://lsst-web.ncsa.illinois.edu/sim-data/sims_featureScheduler_runs/footprints/big_sky_dust10yrs.db

@ljones @yoachim can you please specify what the difference is between newA10yrs and newB10yrs ? also, what is special about big_sky_nouiy10yrs ? is it actually missing observations in uiy bands?

The newA and newB simulations have different footprints and allocations of visits in some of the minisurveys, especially in the galactic plane. They are based loosely on the BigSky footprint suggested in the Big Sky whitepaper, but with modifications to try to incorporate the visits which were specifically requested in some of the other white papers (i.e. the 255 visits/field from the Schwamb et al NES white paper, the visits from the Olsen et al South Celestial Pole white paper, some attempt at coverage to match Euclid/DESI white paper requests, and starting to attempt to accommodate visits for the galactic plane region (although we got more specific feedback later from the SAC which we haven’t had a chance to include yet – it is definitely different than what we have in these runs!). The newA run decreases coverage toward the galactic center, but keeps coverage in the plane away from the center. The newB run keeps higher coverage toward the galactic center but decreases coverage in the plane away from the center.

The big_sky_nouiy is similar (also based on the big sky white paper, but more similar to the footprint/minisurveys laid out there, without enhancement for these other minisurveys), but drops u, i and y band outside of the WFD.

You can get a better feel for where these simulations are gathering visits by looking at the MAF pages for these runs … I apologize for the insufficient navigation on these pages (it’s an update we need to do) but you can find maps of the visits per filter if you look under “Basic Maps” in the links below. 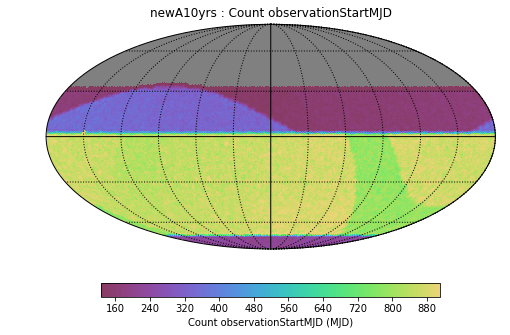 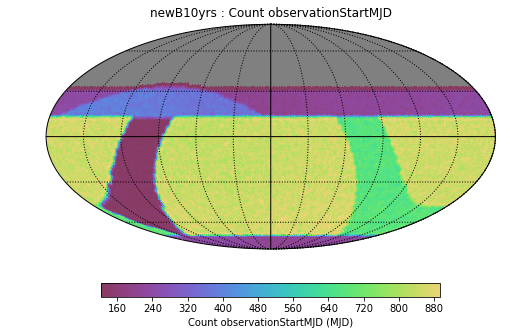 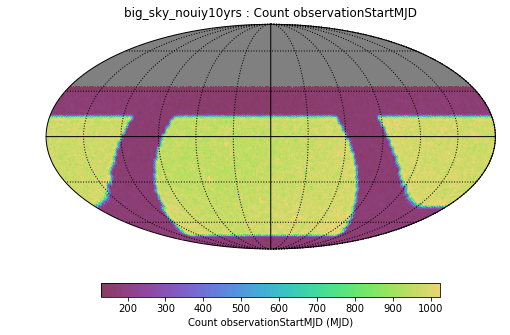 So I am trying to understand why a depth+ebv limited footprint from newA differs so strongly from newB in the higher-dec regions, as we have newB10yrs leading to ~1000 degrees more than newA10yrs with Y10 cuts and the area difference (mainly) seems to be coming from the dec>0 area; you can see the plots I am looking at here. If the main difference between newA and newB is related to the galactic place and galactic center, these results don’t make a lot of sense, right?

Ah - so I thought that newA and newB were using the same extended footprint for the WFD, but it looks like that’s not exactly true. Here’s the coadded depth in i band for newA: 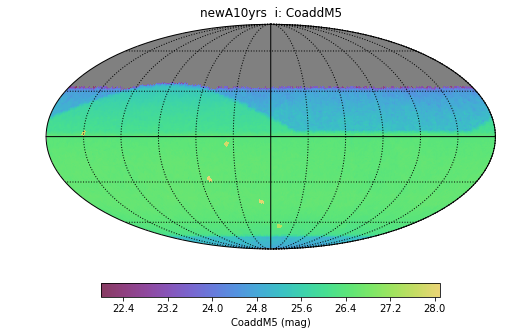 and here it is for newB: 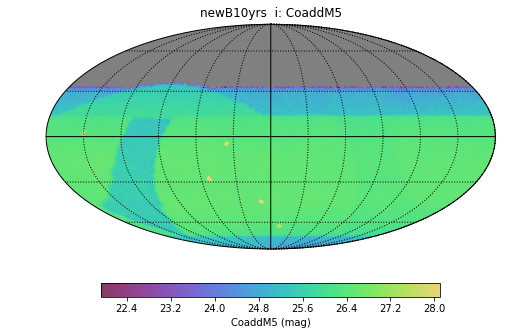 so it looks like newA does not go quite as far north as I had thought (although it looks like they’re both using the extended south boundary, so I’m a bit confused).

Here’s a notebook that displays all the target notebooks: https://github.com/lsst-sims/sims_featureScheduler_runs/blob/master/footprints/viz_footprints.ipynb

For the nouiy footprint, those filters are not used on the galactic plane area.

And if it makes it easier, here’s the code that generates most of the footprints: https://github.com/lsst-sims/sims_featureScheduler_runs/blob/master/footprints/footprints.py