Suppose you have a Jupyter Notebook that runs computations or gathers data, then presents an analysis of that data. Now suppose you want to run this notebook repeatedly: each time you process a new set of data or each time you modify an algorithm. And each time, you want to share those results quickly with colleagues.

In this post, I’d like to introduce you to a new platform that lets you do precisely that. We’re calling it the notebook-based report system, or nbreport for short.

Reports are Jupyter Notebooks. Typically you’ll develop and publish these reports on GitHub. Here’s an example report repository that @KSK helped create based on our Characterization Metric Reports:

A key feature of nbreport is that reports are templated using the usual Jinja syntax you’ve already seen in our Cookiecutter-based projects (like lsst/templates). You can template anything that needs to change each time you run the Jupyter Notebook.

You design notebook-based reports so that when these template variables are filled in, the notebook’s code can compute and generate the report’s outputs like tables and plots. Note that you can template both Python code and Markdown text.

When the report template is eventually rendered into a report instance, that cell looks like this:

You might also template the URI of a Butler data repository and some data IDs in it. The possibilities are endless.

Once you’ve crafted a report, you can start computing and publishing instances of it.

You’ll do this with the convenient nbreport command-line app (docs at https://nbreport.lsst.io). nbreport does these things for you:

Here’s an example of a published report instance (keep in mind this is an early preview and we’ll continue to improve the frontend): 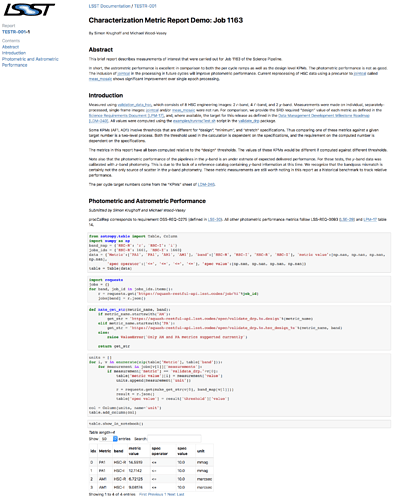 An element of the nbreport system we haven’t built yet is the homepage for each report. These homepages will not only list report instances but also let you filter and search for report instances based on facets like the date and template variables.

Initially, we built nbreport to create nightly observing logs for LSST’s operations (SQR-026). In the short term, we think it will also be useful for pipeline developers and commissioning scientists. We’ve designed the nbreport client to be flexible to accommodate different workflows:

How is this different from technotes?

You might be wondering what makes notebook-based reports different from technotes.

Technotes are documents that you develop on GitHub and publish to the web through LSST the Docs.

Notebook-based reports also use a GitHub-based workflow, but only to develop the report’s templated notebook. Once a report template is set up, you can use it to repeatedly publish new instances of that report that communicates an analysis specific to the inputs you configure with template variables. Report instances are published straight to LSST the Docs and aren’t committed back to GitHub. In the vast majority of cases, you won’t make further edits to a report instance once it’s published.

At the same time, would Jupyter notebook-based technotes be a useful addition to our existing support for reStructuredText and LaTeX? Yes, we think so! Thanks to what we’ve learned building nbreport, I think you can expect to see Jupyter-based technotes in the future.

How to get involved

The nbreport system is still a preview. You can still get involved, though.

Hey @jsick — nice going! This looks great. I’m looking forward to seeing it develop (and am already thinking of a bunch of areas in which we can make use of it).

We’ve added a template for notebook-based reports to the lsst/templates repository. This template will give you a head-start on populating the nbreport.yaml, cookiecutter.json, and templated ipynb files. 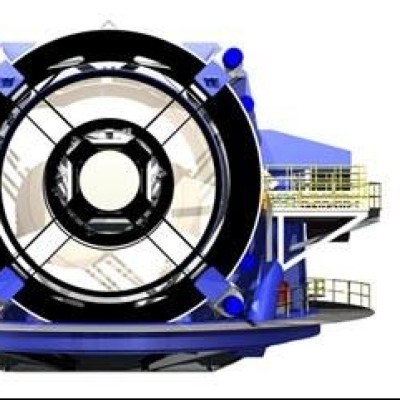 LSST file and project templates. Contribute to lsst/templates development by creating an account on GitHub.

You can either adapt the EXAMPLE-000 project, or you can install and use the templatekit tool to create a new project directly from the template.