Stellar shells appear as low-surface-brightness concentric arcs in about 10-20% of early-type galaxies and a few percent of spirals. They are by-products of close-to-radial mergers of galaxies. Their unique kinematics allow their utilization for measurements of the time of the merger or the gravitational potential of the host galaxy. Data of Rubin Observatory will contain thousands or even tens of thousands of shell galaxies suitable for the merger-time estimates. Our goal is to prepare for the exploitation of data to their full extent.

In Bílek et al. (2013) and Bílek et al. (2014), we developed a ‘shell identification method’ for testing the consistency of a given gravitational potential with the observed shell radii and/or deriving the time since the galactic merger. We applied it on three individual shell galaxies: 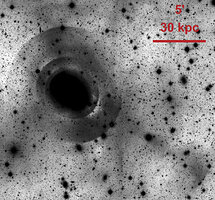 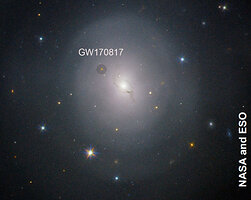 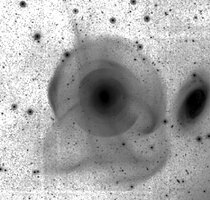 Left: For NGC 3923 — the richest known shell system, in Bílek et al. (2013, 2014), we proved consistency of the shell distribution with MOND in multiple-shell-generation framework and derived the ages of individual shell generations; image: CFHT/MegaCam ultra deep image, host-light model subtracted, Bílek et al. (2016)
Middle: For NGC 4993 ⁠— the host of the famous gravitational-wave event GW170817, in Ebrová et al. (2020), we inferred the merger time, the probable lower limit on the age of GW170817 progenitor, and estimated the probability that the progenitor originates in the accreted galaxy; image: NASA and ESO
Right: For the spectacular shell galaxy NGC 474, in Bílek et al. (2022), we explained the origin of structure and derived a complex timeline of the evolution of the host galaxy; image: the MATLAS deep imaging survey (Duc et al. 2015, Bílek et al. 2020)

Snapshots from a Gadget-2 simulation of the formation of shell system similar to NGC 4993 in a merger with 1:10 stellar-mass ratio, elliptical primary galaxy and secondary with inclined disk and 6 kpc impact parameter:

Mergers are an important part of galaxy evolution. In Ebrová et al. (2021), we proved a link between mergers and prolate rotation on a sample of 19 galaxies. LSST data will allow for such analyses on much larger samples for a variety of phenomena as a function of the time merger.

To enable this for such a large number of galaxies, we need to work on the automation of:

When successful, it will mean a huge qualitative leap in our knowledge of the merger history of the nearby universe.