RRB: Simulations of Ultracool Dwarfs Counts with the LSST

Abstract
Ultracool dwarfs stars and brown dwarfs (M< 0.1 solar masses) comprise a significant proportion of stars in the Milky Way. In this blog post, we discuss the preliminary results of our kickstarter grant that aims to properly simulate UCDs in the Rubin DP0 data and to predict their number counts in the Rubin surveys. Using simulations that account for UCDs formation, evolution and survey properties, we model the observable population of UCDs with Rubin and we provide an extended DP0 catalog.

Motivation: simulations of UCDs that account for their evolution and metallicity effects
Ultracool dwarfs are ubiquitous in the Milky Way, hence they trace its evolution and formation. Deep samples of ultracool dwarfs have the potential to constrain the formation history and evolution of low-mass objects in the Galaxy, but well-characterized photometric and spectral samples have until recently been limited to the local volume (d < 500pc). Fortunately, the Vera Rubin Observatory will uncover millions of stars throughout various environments in the Galaxy, and new tools are needed to analyze these data. Such tools are already under development. For example, the LSST DP0 has provided a simulated catalog of stars and brown dwarfs in one of the LSST fields. However, these simulations did not take into account the effects of cooling and evolution of UCDs and metallicity. We built from this data set to simulate observations of ultracool in the DP0 data and we made comparisons between our simulated catalog and the DP0 catalogs. We also make predictions for the total number counts of UCDs that will be observed by Rubin over its 10 year period.

Preliminary results: Selection Criteria and Number Counts
We found that we will detect ~1 million UCDs, including > 300,000 L type dwarfs and thousands of T dwarfs with full photometric information in g, r, i, z and y bands, and precision astrometric measurements . We also found that this population will be dominated by thick disk and thin disk sources, with >10,000 halo late-Ms and early L dwarfs. In addition, we generated a parallel catalog of UCDs to be added to the DP0 simulations. We found that we will be able to identify UCDs in these simulations by their kinematics and colors. However, we are limited by the lack of metal-poor UCDs templates and metal-poor models to properly simulate these rare thick disk and halo populations. 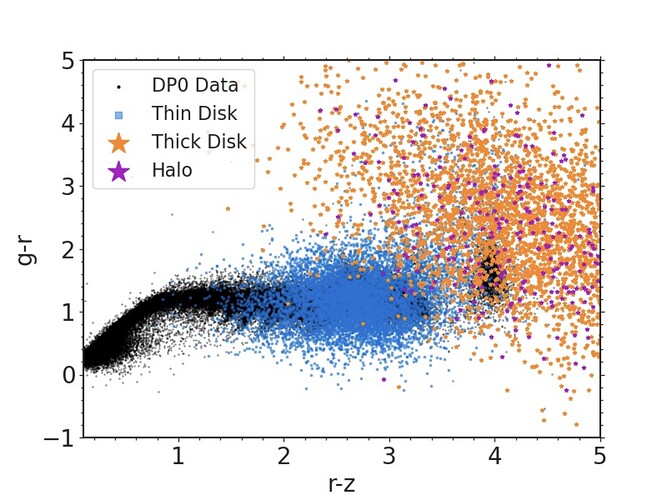 Color-color plot showing simulated UCDs that are dwarfs (blue squares) and subdwarfs (orange and red stars). We show the simulated main-sequence from the LSST DP0 release in black

Left: expected counts and surface densities of UCDs in different galactic populations as a function of spectral type. Right: similar to the left with longer 10-year magnitude depths.