Hi all (but particularly the SSSC),

I’ve been getting solar system metrics running on the new runs, and have put some of the results up online. I’ll be working on writing some higher level analysis as well next, that compares the different runs, but you can see the results from each run at http://astro-lsst-01.astro.washington.edu:8081/ (look for MAF Comments that say “SSO granvik_5k”, “SSO mba_5k”, “SSO trojan_5k” and “SSO l7_5k”, for NEOs, MBAs, Jovian Trojans, and (non-resonant) TNOs, respectively.

I know there is a need to include MBCs and resonant TNOs in these evaluations - I’m still working on adding those.

I should note for @schesley and @fraserw that I have used their new color and lightcurve inversion metrics in this round! 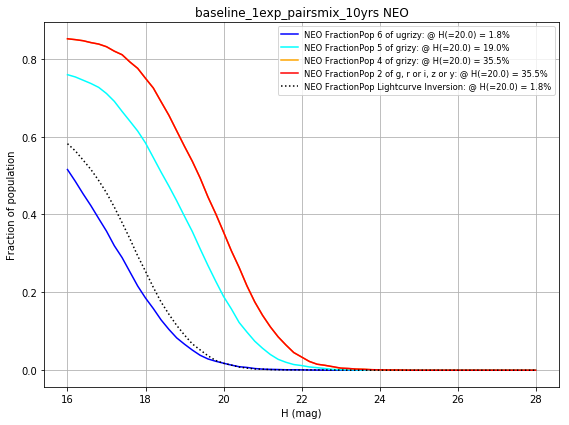 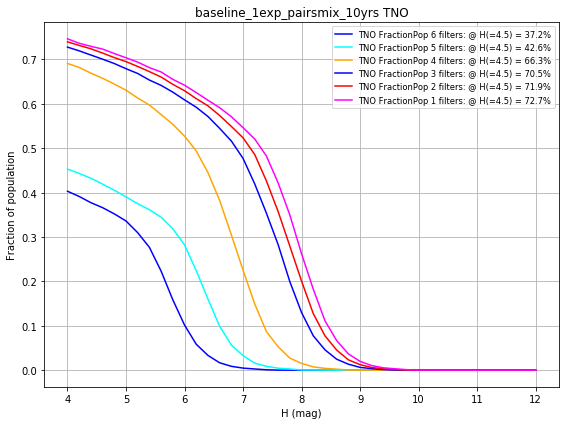 This is great Lynne. Can you break this info specific filter, my guess is r and g are where you pick up most KBOs?

@ljones if we were to run the LSST moving object simulation code (run_moving.py ), of the new new simulations you link to what is the best one to run that’s closest to the baseline2018a to use? baseline_1exp_pairsmix_10yrs?

The one closest to the old run would be baseline_2exp_pairsame but baseline_1exp_pairsmix is closer to what we’re currently using as the basis for the intranight visits for other simulations.

I have made updates to maf that I should tell you about! (the code on the juptyerhub is not yet updated until I could do that … so run-moving will work but will not give you the new metric yet). It’ll be a small change from your point of view I hope and I can post an update later today.

The current metric doesn’t do the color specification for the outer solar system. We could further modify it to do so or add something new) - it really is just reporting the number of filters that generate a color (after requiring more visits in the first filter to set a light curve).

@ljones I’ve been thinking about template generation in Year 1. MOPS doesn’t work unless there is a suitable template for image subtraction made since it uses the diaobjects to do its linking. My understanding is that what to do about templates isn’t set for year 1 yet according to Melissa Graham’s presentation at this year’s Project and Community workshop and this summary document she and others wrote.

Templates are built during Data Release processing, so unless there is a plan implemented to do something different in year 1 it could be 6- months to a year for there to be Solar System object detections produced by LSST project at the start of the survey. This isn’t captured in the current MAF metrics from my reading of the COSEP and science book. Is that correct?

Template generation and cadence seem to me to be related. Some possible scenarios were presented at the August meeting about templates from data obtained during LOY1 (e.g., monthly), and use them to generate alerts and nightly pair subtraction. Is there a way to look at the cadence scenarios and see if they would produce sufficient observations for the monthly templates or not? Also is there an easy way to look at Year 1 detections and see what fraction of the different populations ‘detected’ by LSST with enough observations for MOPS to run and there is a template generated within X days of that point in the monthly template creation case.