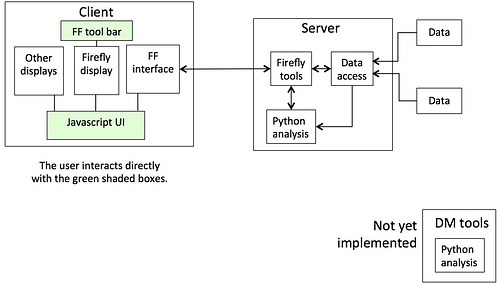 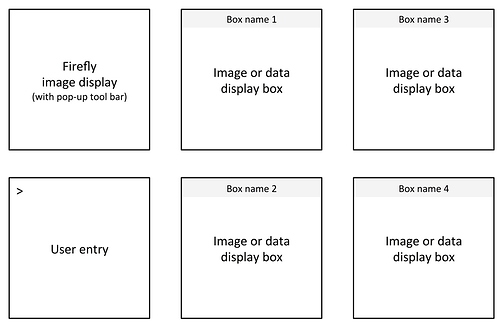 Two use cases:
Use cases are now in a Google doc.

Select an image region and calculate some statistics in it.

Assume that an image is being displayed in one box.

I am choosing one scenario. There might be many ways to do this.

Assume that two images are being displayed in two boxes.

This is a copy of an email from @dyue2 about @jjt’s diagram:

Your diagram is mostly correct. However, the reality is a little bit more complicated than what you described.

Firefly display is in some way directly linked to firefly-tools for image access and (table data access, however we currently did not use those functions). However, the communication is controlled by the parameter set with javascript.

Firefly display has its own UI, which covers some of the usage cases. However, these UI operation currently is beyond our control.

On the server side, the data access is more nuanced. The firefly tools only provides the information passed from the frontside, and they expect us to have a direct access from python analysis to data access for calculation purpose.

That been said, firefly tools also had access to the data for display, and that was controlled by the FF interface.

So, I feel we could really benefit to have a diagram as you propose, that would make the architecture more manageable. I am sorry that my explanation might not be very straightforward.

The interface between the Javascript UI and display is through various API provided by the Firefly. Currently we can read mouse (pixel position) and draw ds9 region,

Backend FF is a process and python analysis is a subprocess, and I believe the DM will be incorporated into the architecture as a library that will be called by the python process later on. Currently firefly is only a mediator that passes the information the user sent at the frontend and the calculation we performed at the backend, but nothing more. Currently we mainly use the most widely-used “json” format for the communication.

I am choosing one scenario. There might be many ways to do this.

I have a proposal to this. It is easier to maintain a display stack (using html tag for example) based on firefly’s image viewer. And the operation of start blink and stop blink is equivalent to bubbling the individual viewer to the top of the stack. And it is much easier to control from the outside. And if that is the case, it is easier to imagine the operation including splitting stack and join stack.