Hi, I am afraid I will not be able to join the meeting this week, as I will be driving to Newark at that time with Mike Huffer. We did succeed in getting firefly installed at BNL. It took most of the week to get the test stand itself working, so we did not get as much time to demo firefly and get feedback as we had hoped, but we did succeed in using CCD emulators to generate a full raft image through camera electronics, DAQ, CCS and assembled into a mosaic which we could view with firefly (see attached). We will now work on setting up the same thing at SLAC and getting more feedback from the BNL team. 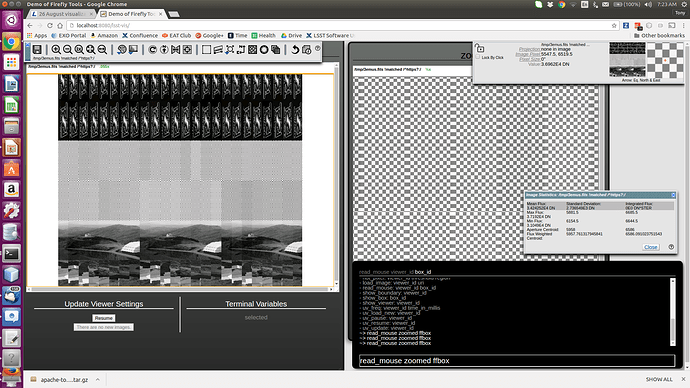 Some issues which came up during the install:

I am sure we will get much more feedback over the next few weeks as more people start to use it.

I would like us to start planning to migrate the camera visualization code to use the new JS/React/Redux based Firefly. I am willing to support the effort with some IPAC people working closely with UIUC team. What do you all think?

This is a good idea. I will be gone until September 8. Let’s plan to discuss this at the September 9 meeting.

I have put the new Firefly API links into a separate topic. Everyone is welcome to check it out. Forgot to mention, that master branch matches the release version.