I’m writing to share the results of a hack session involving a few DP0 delegates at Carnegie Mellon after the July 22 DP0 delegate assembly.

Since the delegate assembly involved going through a tutorial notebook demonstrating the use of catalog queries with TAP, I decided to do the following:

My code is available in a contributed notebook, the beginning of which is based heavily on the existing tutorial. Due to limited time available, I did not have the opportunity to review the other tutorials and see if there are better ways to make some of the plots - so I’m sure there are ways one could improve on this notebook.

My main conclusions from this exercise are as follows:

Some illustrative plots are below.

This is simply a 2D histogram of the detected object density with very basic flag cuts and an i-band magnitude cut, for DP0.1 and DP0.2 object catalogs. You can see that the fluctuations trace each other but they are not 100% identical.

I also cross-matched the catalogs to identify counterparts in DP0.1 and DP0.2, and for these counterparts, compared the cmodel magnitudes in the i-band. In the plot below, pink and blue solid lines are the median Delta(mag)=mag(DP0.2)-mag(DP0.1) for objects flagged as isolated by Scarlet vs. everything else. The dashed lines show the 10th and 90th percentiles of Delta(mag), which I used as a rough measure of the width of the Delta(mag) distribution. 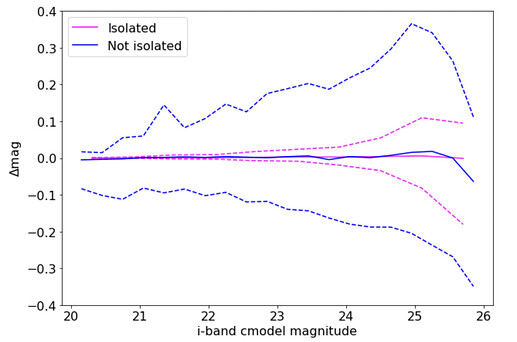 This suggests (to me at least) that the change in deblender from DP0.1 to DP0.2 might be the primary cause for changes in the cmodel photometry, and that DP0.2 might be an interesting dataset for exploring the interaction between the Scarlet deblender and other algorithms.

Feedback on all this is welcome!