We had previously thought the FBS 1.4 set of runs would be the last ‘big’ set with families/individual aspect survey strategy variations, but it turns out we were wrong – but for a positive reason. If you remember, most of our observations are taken as part of a “blob” Survey … this is the survey mode which activates for most of the footprint and for most of the time (except when weather conditions are unstable, such as during twilight). The “blob” survey chooses a portion of the sky that has the highest ‘reward’ function and then observes fields within this region over a given time span (about 20-40 minutes) and then repeats those fields in order to get a pair of visits in each night. In FBS 1.4 and prior, the choice of the fields within that ‘blob’ was based on the reward function (without consideration of location) and then the order was determined using a traveling salesman solution for efficient slewing. With FBS 1.5, we have experimented with adding an additional criteria – location of the field within the blob … more specifically, closeness to previously observed fields. This leads to observing contiguous/overlapping fields within each blob, which should increase the amount of sky available for rapid transient study, as well as hopefully improving SSO recovery. We found it also reduced the slew time significantly (well, the median dropped by 0.05s, but the mean fell by almost 1 second … which is significant when you have a lot of slews, and resulted in about 1% better open shutter fraction – a more efficient survey!). A 1% increase in efficiency is within our uncertainty on the weather … but we thought it was important enough that it was worth rerunning most of the FBS 1.4 runs with this new blob scheduling algorithm to let you compare.

Please note that we expect comparisons of metric results within families of FBS 1.4 runs to translate pretty directly to similar comparisons of families in FBS 1.5. Thus some families (in particular some related to new defaults we’ve adopted here in FBS 1.5) have been dropped in this FBS 1.5 run – but you could still look at the results in FBS 1.4 and the effects should be valid. However, if you would like us to recreate additional runs in FBS 1.5, please let us know. Comparison of runs between FBS 1.4 and FBS 1.5 (without normalizing by their respective baseline runs) is not a generally a good idea unless you’re looking for the specific difference induced by the change in blob scheduling.

As an example of the change in blob strategy, here is an alt-az plot of a night about halfway into the survey - you can see that the pointings are more contiguous in 1.5 than in 1.4: 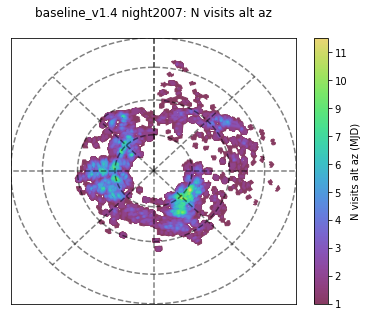 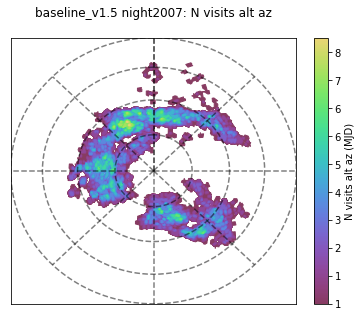 Alternately, here is movie comparison of the visits within an early night in the survey (night 50) in baseline_v1.4_10yrs (left) and baseline_v1.5_10yrs (right) to show the difference between FBS 1.4 and FBS 1.5 blob scheduling –

(there are some differences because the 1.4 baseline triggers a DD field early in the night, while the 1.5 baseline did not, but otherwise you can see how the ‘blobs’ in 1.4 are fields which are nearby, but not contiguous, while in 1.5 they are contiguous pointings).

Other changes in the overall default strategy have been implemented between FBS 1.4 and FBS 1.5:

Downloads
The FBS 1.5 simulations are available to download at either:
https://lsst-web.ncsa.illinois.edu/sim-data/sims_featureScheduler_runs1.5/
or
https://epyc.astro.washington.edu/~lynnej/opsim_downloads/fbs_1.5/ (these versions have an approximate labelling system for visits … see WFD metrics with the FBS output for more information on what this labelling could or could not help with). The links in the descriptions below go to this location for brevity, but the NCSA link is completely valid as well).
The directories contain ‘families’ of runs which aim to investigate a particular feature of interest in the survey strategy. The notes in each directory contain some information on the variation in question, and you can find in-depth information (via the actual python scheduler configuration scripts) for each run in https://github.com/lsst-sims/sims_featureScheduler_runs1.5

You can reach MAF metric analysis for these runs at:
http://astro-lsst-01.astro.washington.edu:8081/
There are several MAF output links for each run, including Metadata+ (a general collection of mostly metadata-related metrics, such as airmass, visit depth, etc. but also some SRD metrics), Glance (a very brief top-level set of metrics to check overall quality of the simulation), SSO (a collection of solar system object oriented metrics, which welcomes further expansion and input from the community) and ScienceRadar (a high level, science-oriented collection of metrics which also needs expansion and input from the community).

Family Summaries
A high level description of the families of simulations investigated in FBS 1.5.

Happy simulation investigating! Please reach out (either here on community.lsst.org in the ‘survey strategy’ area or via email) for questions or help.
If the large number of runs seems overwhelming to you, I would suggest starting with a family that looks like it should impact your science and looking to see if your metrics reflect the changes you expected. If so, great. If not, why not? And then also running your metrics on the other families (or looking at our results, if you’ve already contributed and we ran your metric) and looking for any outliers. If you see runs that do particularly well or particularly poorly, why was that? If they all seem the same … is your metric not sensitive as expected (why not?) or is it just that the variations in the survey strategy don’t really impact your science (this happens not infrequently, due to the large number of visits)? Talk about it on community.lsst.org!

(in case this is also helpful - FBS 1.4 announcement and links).