Let’s use this topic to refine our request for coverage of the Galactic Plane and SCP.

Update: here’s the google doc scratchpad for distilling specific requests (also linked in the thread below).

With the SCOC Phase II recommendations expected on about December 15th, there is still time for the Galactic science community to provide input on the spatial footprint, filter balance, and rolling cadence options for “Galactic Plane” science (loosely defined, and I’m interpreting this to mean the South Celestial Pole (SCP) region as well). These are questions 1, 3, 4 of the eight “Phase II” questions from the SCOC - optimization of the Galactic Plane region is still one of the key issues on which the community has been asked for input before Phase II.

The following might be a good way to begin: at the Third SCOC Workshop this week, the following two actions were suggested:

So we as a community should coalesce on a small set of opsim experiments we need to “optimize” coverage of the inner Galaxy and SCP. These can be curated on e.g. a google doc linked from this thread, with the aim of presenting a practical, limited set of requests to the simulations team. Let’s aim for November 15th as a target date so that the simulations can be run while the Phase II recommendation is still in the future.

There has already been a lot of prior work on this, particularly by @ljones and @rstreet - the end-of-survey NVISITS for v2.99 of the simulations looks like the diagrams below (in Galactic then Equatorial coordinates - thanks to Lynne for these!), and there is already some exploration of various options within the v2.2 and v2.99 batches of opsims.

As I understand it, the current GP footprint is based on the collection of prioritized science cases, mainly from the TVS and SMWLV science collaborations, de-emphasizing most areas of high extinction (with input from DESC) and with disconnected patches largely merged into a few contiguous groups for survey efficiency reasons. But there is room for improvement! For example: 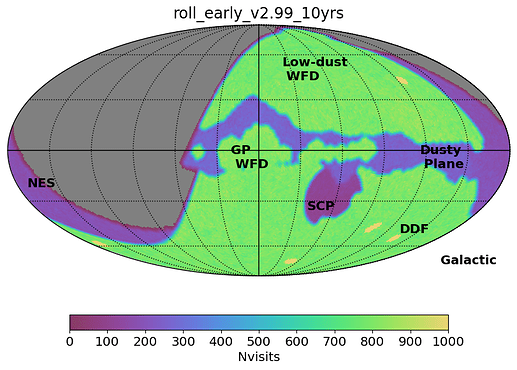 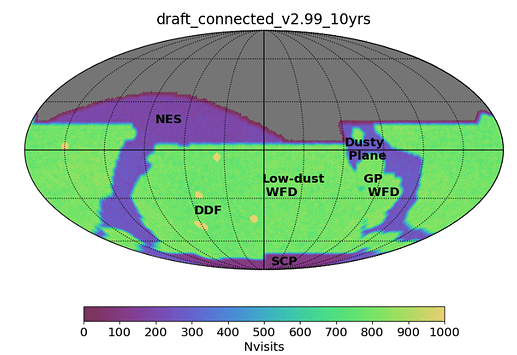 To try to start the ball rolling, here’s a trial-balloon example of what a more contiguous inner-Plane strategy might look like. This uses as a minimal set the current set of pointings in the inner Galaxy, expanding it to produce a contiguous block (and thus relaxing somewhat the extinction boundary). The exposures necessary to do this would be paid for by adjusting the filter balance in the Plane-WFD regions (e.g. can the higher-cadence monitoring to support variability in magnitude and position be concentrated in a couple of filters - say, i and g? We should be able to determine this.). 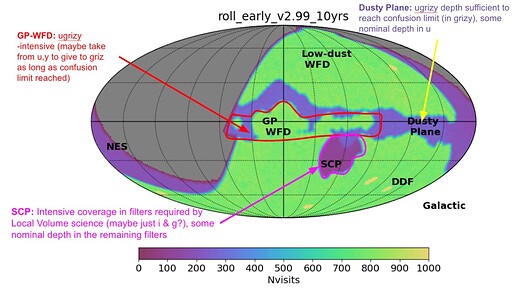 Thanks for kicking off the conversation, Will!

My interests are in finding satellite dwarf galaxies around the Milky Way and in the Local Volume, and other studies of the stellar halo of the Galaxy. Reaching roughly WFD depth in a limited set of filters would likely accomplish this reasonably well. Of course, I recognize that LSST is a survey, and there are many other needs to consider. I assumed that the extragalactic community won’t be very interested in the SCP region because it must always be observed at high airmass. Additionally, that region is far enough from the Galactic plane that most MW science cases (other than stellar halo) may not be affected much, and I think far enough from the Ecliptic that Solar System won’t be affected a lot by a limited filter set (and the already limited number of visits in the baseline plan). I am happy to be corrected if I am mistaken about any of these assumptions.

For my own science of looking for star clusters beyond the local group, the SCP is not ideal since it is only going to be observed at high airmass, making it harder to distinguish star clusters and background galaxies based on their angular sizes. Having said that you can do something for nearby galaxies with only a handful of visits in each band. I would still want some data in each of the Rubin bands - the wide wavelength coverage is quite useful for star-star cluster-galaxy separation.

Having said that there are few known nearby (< 11 Mpc) galaxies in the SCP. Whether this is due to there actually being few galaxies there or the area being poorly studied, I do not know. Here are some plots of the v2.1 footprint with the galaxies from the Karachentsev et al. (2013) catalogue overlaid in orange. The size of the points is proportional to the K-band luminosities. 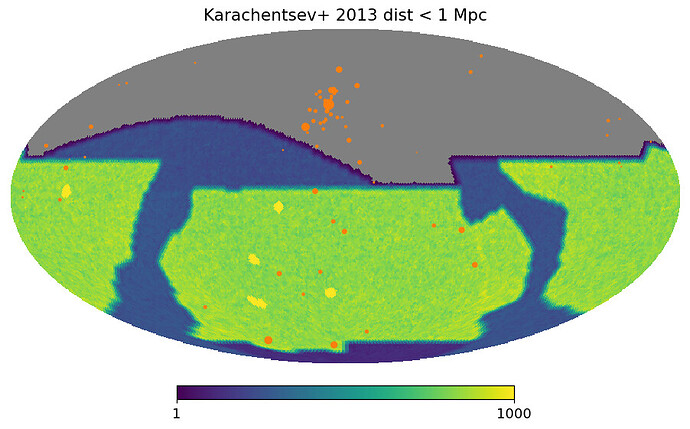 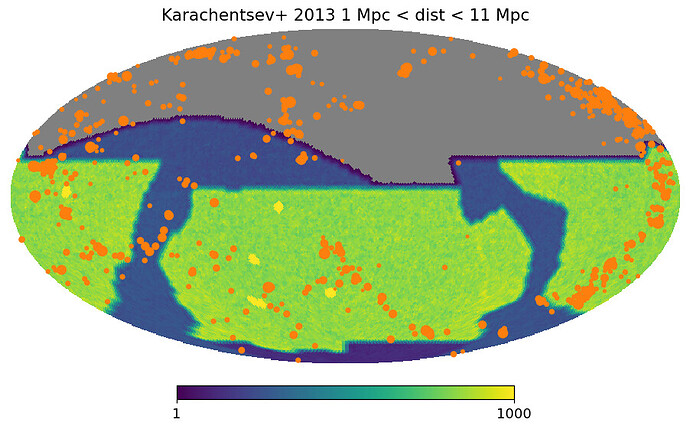 Here is the connected_v2.99 footprint overplotted with known Galactic open and globular clusters. 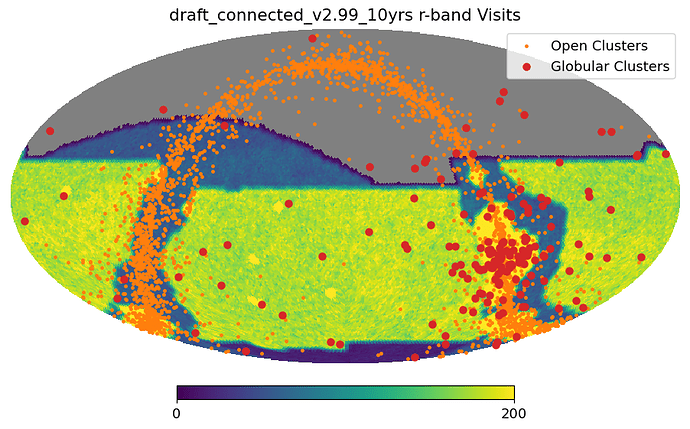 Thanks, @chrisusher - this is really helpful. Indeed if there are few known <11Mpc galaxies in the SCP because it’s traditionally been difficult to study, that would seem to suggest another nice area for LSST to make an impact.

Do you have any sense for whether the current SCP coverage in all bands (in v2.99) is sufficient for the star-galaxy separation you would wish to do?

… and a possibly related question also on the SCP: what other facilities are there that could observe the SCP region better than LSST for similar kinds of science? I’m thinking of any multiband seeing-limited O/IR imagers that are meaningfully further South than Cerro Pachon…

thank you @willclarkson and all, very interesting discussions!
Keep in mind that some of the solutions you may propose may have an impact on the efficiency of the survey. To zero-th order, we are looking at how to modifying things within the GP in ways that do not impact the WFD. Things that may impact efficiency include how to cover the region (patchy vs contiguous has impact on slew time) and the filter changes (more changes = less efficiency). I just want you to keep it in mind at this time: changes that you may propose may end up reducing the number of images collected overall in the GP, if we intend to keep the impact of the GP choices contained in the fraction of time allocated to the GP (or GP + SCP). (All this of course would naturally come out of simulations and applications of metrics, just trying to limit surprised)

Hi @chrisusher many thanks for this plot. I worked with @lgirardi in particular to include lists of both open and globular clusters in the combined science maps of ‘high priority regions’ that I produced, so I tried to include as many of them as possible when proposing the current GalPlane footprint. The limits on the area we can cover at different cadence was the limiting factor which meant I could not include more of them, so I worked with Leo to come up with a way of assigning priority so that at least some important ones are included. However, this is a highly tunable approach, so there is more we can do to optimize it, and it would be interesting to know whether your science requires time domain or deep sky imaging and in what filters?

Hi Chris - thanks for the awesome plots! Is it fair to say that because extragalactic GCs around known systems from the Karachentsev+ catalog will be fairly bright, it would be OK to focus most of the SCP on gi or gri bands, as long as at least a couple/few visits were obtained in other bands to provide colors?

Thanks, @fed - good to keep in mind that updates in one area may have unintended efficiency impacts elsewhere. I agree that the metrics (for all the science) should allow this to be assessed.

Yes, it would be ok to focus on gi or gri. For the extragalactic star cluster science there is not an either or - have more bands and deeper bands would help but you can still do some science with only a single colour. In terms of filter balance I would prefer to keep the existing u-band depth but to transfer most of the z and y into g and r.

It’s worth keeping in mind that the SCP only has about 20 visits per band currently. I assume there is some minimum number of visits required to produce decently calibrated data.

I agree with Chris. For stellar population studies the u filter is more important compared to the z and y filters. Those are difficult to calibrate and there are not many models available.

@chrisusher re: minimum number of visits required to produce decently calibrated data: do we already have metrics for this? I would think there would be some straightforward threshold on the m5metric for example. Does the LV dwarf satellites metric do what you need (example evaluation here for draft_connected_v2.99_10yrs)? @jeffcarlin almost certainly has a good answer for this.

I have started an openly-editable google doc as a scratchpad for rubin_sim experiments we might request. Edits and contributions are most welcome, currently this is very rough.

For those available, I’ve set up a Zoom telecon for Friday November 11th at 11:00am EST to discuss the experiments we will want to request. This will not be the final word - so if you cannot make this telecon, there will be more time to work on the requests - but I would like us to at least have a trial-balloon set of simulations to request by the end of this telecon.

Connection information is in the google doc linked above.

For information on the four v2.99 opsim experiments, including the new “connected” footprint and the “low plane” footprint, please see this Community post by Lynne:

Quick reminder about the 11:00am EST telecon today, for those who can make it. Connection and agenda are in the google doc.

Thanks to those who were able to participate in the telecon just now, which was most productive. The livenotes are at this link (in the shared google doc).

I’ve given myself the action to write up trial-balloon tables of opsim requests we might make. I will post on this thread when I’ve done that… modulo local obligations, I expect to get this done during the day today (Fri Nov 11).

I’ve sketched the table of experiments for the SCP region, the GP region will take a little longer. The google doc will update live, here is how the first draft of the table currently looks. The first row is the current baseline (draft_connected_v2.99_10yrs) for comparison.

This is just a first draft, though - improvements are sorely needed! For example, for the “minimum” coverage, I made up the figures of 15 exposures for all but y, and 5 exposures for y-band. Cutting the minimum further would free up more exposures for the filters chosen for deeper coverage.