Please find details on this webpage

Please note the release of 4 new simulations of the LSST strategy, version 2.99, which you can find at Draft of v3.0 survey strategies (v2.99) - on the community post you can find a link to the simulation databases, as well as a notebook that shows the performance of each against key metrics and in comparison to prior simulations. We will present the simulations at the workshop.

While I appreciate and support the large amount of efforts that have gone into creating the simulations throughout this process, the single digit number of working days between the release of the new v2.99 simulations and the workshop does not give very much time for even small science collaborations like SSSC to review, evaluate, meet and discuss the new simulations and provide meaningful feedback to the Project. As far as I know from my own experience in SSSC, basically no-one is being paid to work on Rubin cadence as part of their day job and it’s unreasonable to have people drop everything and have to give a hurried evaluation of such a critical part of Rubin operations as the cadence for the next 10 years of the survey. The very compressed timescale and uncertainty about future opportunities for additional feedback seems to be detrimental to a careful review of these first combined, near-final cadences on everybody’s science.
My 0.02 units of depreciating currency of choice…

I generally agree with this reaction. Thanks, Niel

Thank you for running and forwarding the v2.99 simulations and plots. It’s great to see that the Twilight Survey is getting stimulated. We owe a big thanks to Lynne and Peter for running and analyzing these simulations. I have been thinking of the decision to run the Twilight Survey during the evening vs the morning and wondering if it could be optimized. The Zwicky Transient Facility (ZTF) has been running its Twilight Survey during both evening and morning twilight since 2019 observing fields within 35-55 degrees from the sun. The ZTF Twilight Survey has found a number of Atiras, 'Ayló’chaxnim, and half a dozen or so comets. All of these discoveries were made during morning twilight except for 'Ayló’chaxnim which was discovered in evening twilight in January 2020.

One reason for the increased amount of asteroid and comet discoveries made during morning twilight could be due to the observing conditions being more calm compared to evening twilight. Another reason could be that objects discovered in morning twilight typically have a longer time to be followed up due to the fact that the Sun is moving away from that part of the sky. This could be especially true for comets which can be on orbits that take them far from the Sun. Therefore, from a pure follow-up and observing conditions perspective, it might favorable for the Twilight Survey to run during the morning if only one side of the Twilight survey can be run. A problem with this approach which you have identified is that it cuts down on the rate of discoveries. As an example, 'Ayló’chaxnim, the first known asteroid located entirely within the orbit of Venus, was found in the evening twilight sky. Therefore, we may be missing out on potentially interesting discoveries if we limit the twilight survey to just one side during the morning.

A possible solution may be to compromise by alternating between evening and morning depending on the time of the year. I have attached two plots showing the RA, Dec locations of ZTF Twilight survey asteroid, and comet discoveries. The locations of the ecliptic and galaxy are also shown in these plots. ZTF is located ~30 degrees latitude so portions of the sky that are ~30 declinations tend to be at higher altitude/lower airmass during twilight observations compared to the sky at larger or smaller declinations resulting in better throughput. Comets have a relatively more isotropic skyplane distribution compared to asteroids and are found uniformly in RA between 0 and 60 degrees declination as seen in the first attached plot. Asteroids preferentially hug the ecliptic as seen in the second attached plot. The month corresponding to the Sun’s RA location is displayed on the top x-axis of these plots. Rubin Observatory will be located at latitude ~-30 degrees, so one can imagine that the skyplane lociations of the comets, Atiras and 'Ayló’chaxnims will be flipped relative to ZTF, i.e., between 0 and -60 degrees and along the ecliptic. 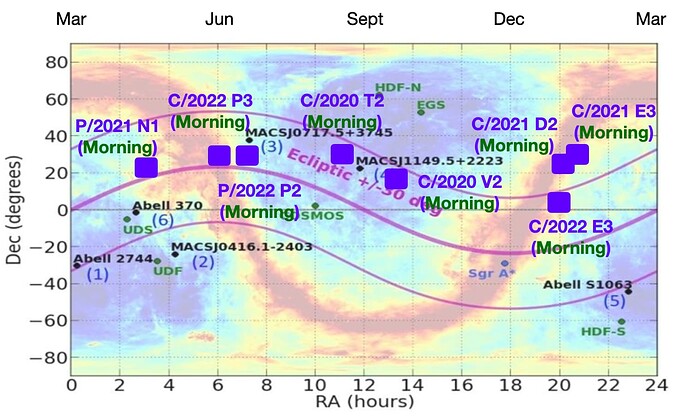 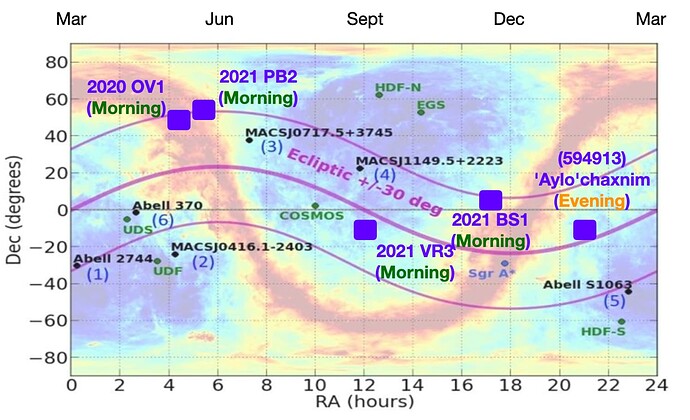 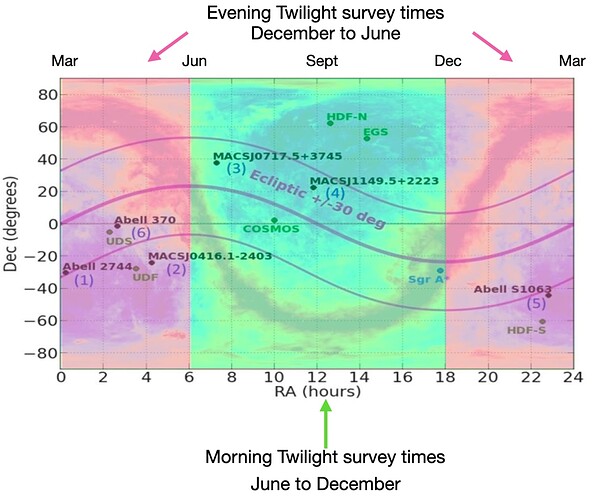 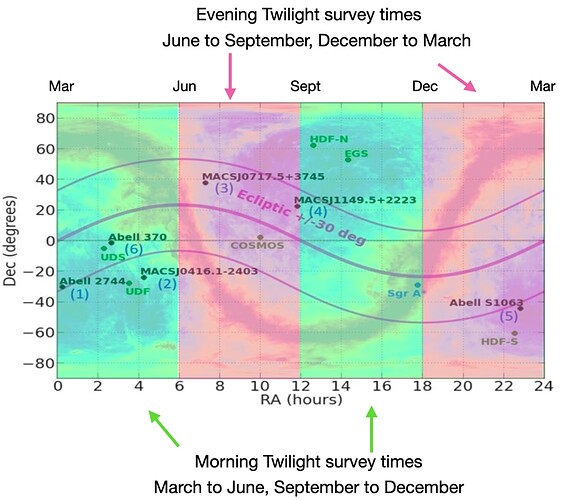 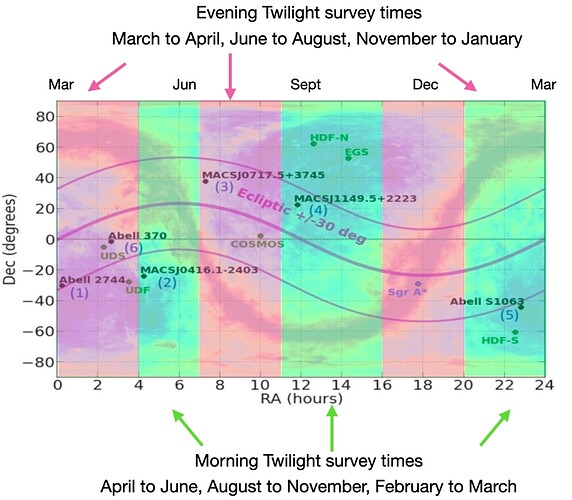 there was a misunderstanding I think: the idea was not that people would have reviewed and formed an opinion and prepared to argue about the four simulations in the week since release.

We have iteratively shared our recommendations (most recommendation elements that we have now were presented at the workshop in August with no changes). The earliest they could converge in simulations was just over a week ago and we promptly released them. We have supported the process of reviewing the four simulations with a notebook that the Survey Strategy team ran with the SC specific metrics survey_strategy/Draft v3.ipynb at main · lsst-pst/survey_strategy · GitHub. In the notebook there are SS specific sections for your convenience where the SSSC metrics are run against all four simulations (and earlier ones for comparison) - as well as portions specific to other sciences and system requirements.
We are also making space within the workshop schedule to allow the SCs (or other relevant groups) to get together and review what we present and what we provided.

Finally, as we indicated at the PCW in august that while some parameters of the survey strategy have what we consider our finalized recommendation, many remain to be finalized (we will discuss exactly which at the workshop) and for those there will be space for feedback and conversations throughout until they are finalized. We are forming our recommendation over time and will be engaged in conversations with the community throughout.

Involvement of the community to this degree in the decisions about the strategy is a process without precedent which we are all figuring out together with the community. The decision process is complex and not always linear and we have many ways to continuously engage with the community. This workshop should be seen as an opportunity to interface with the SCOC more directly and ask questions and initiate conversations, certainly not the only opportunity for feedback, and there is no demand to give us feedback, tho we are working very hard to provide as many opportunities as possible to do so.

Thanks Bryce - this is an interesting idea and nicely thought through.
We are hoping to be able to cover both morning and evening twilight, so will be looking at that, and the point about avoiding the galactic plane by choosing particularly morning or evening at various times of years is helpful.

Hi @bbolin, Let me echo @ljones 's thank you - I was still digesting your message but indeed, there is a recommendation to evaluate if the survey could be run only in the morning, but the default mode of operation for this survey should be morning and evenings and we will simulate it that way shortly.

You’re welcome @ljones and @fed I’m glad to clarify if you have questions about what I wrote or have other questions.

SCOC Looking ahead: members rotation, timeline for feedback by topic
(Introduction of new SCOC members, Communication Process and feedback through December 2022 and in 2023)

Breakout and SC feedback on the current recommendations