Admittedly, I’m using an old pipeline version (v19_0_0), but I still thought this topic and the associated “edge case” DECam examples might be worth bringing up irrespective of the exact pipeline version.

I have been running some test samples of hundreds of random DECaLS exposures through processCcd, to obtain detrended images and photometric/astrometric calibrations.

The first two such examples I looked at were:

Both of these cases have a bright (V ~ 4 mag) star right near the corner of the CCD. The logs show that the “time sink” is happening in the deblending stage: 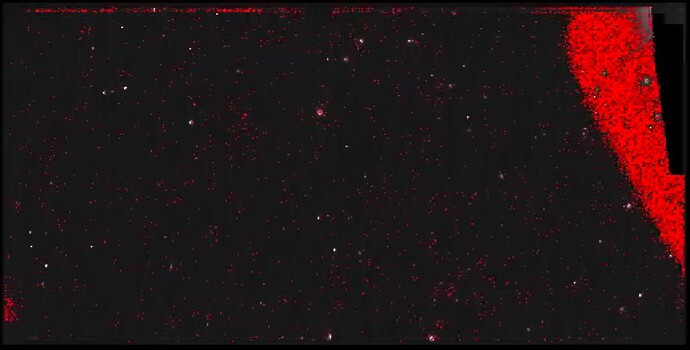 And for reference here’s what the DECam footprint overlaid on the DECaLS sky viewer looks like: 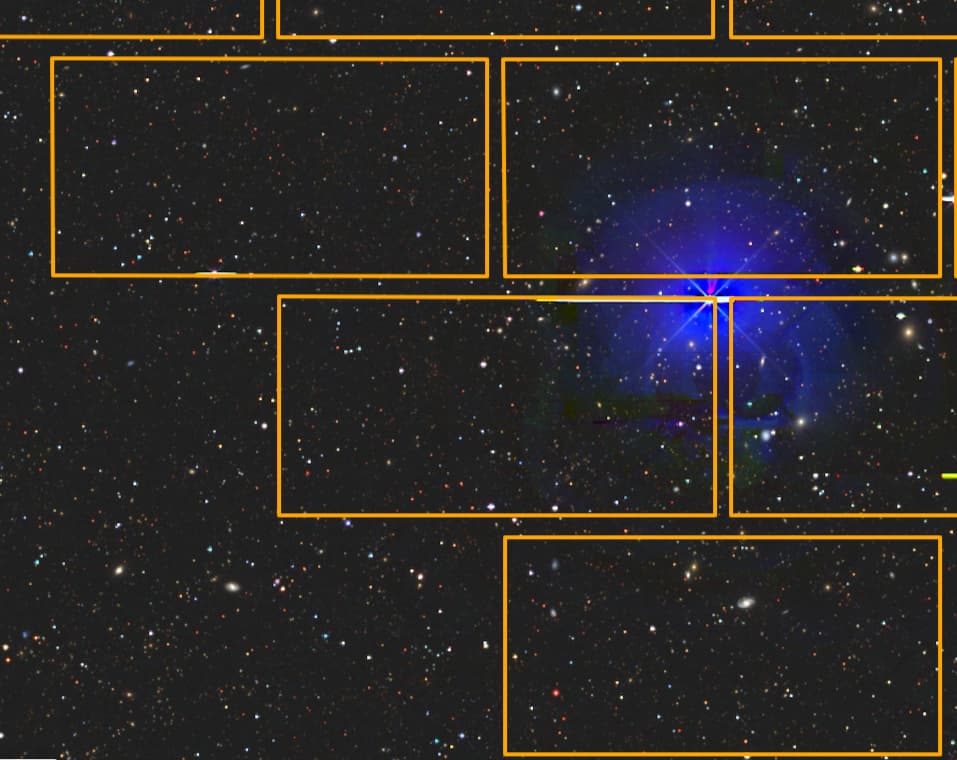 So it seems that we have a case where the wings of a bright star with centroid very near or slightly off the CCD edge are being deblended into large numbers of spurious sources.

One other odd aspect of this that I’m finding: if I run, say (EXPNUM = 430396, CCDNUM = 59), followed by some other “typical” CCD (by specifying a list of dataId’s to processCcd and using just one serial Python process), the memory usage spikes during deblending of the bright star wings, and then remains high at ~23+ GB, even throughout processing of the second unrelated CCD in the list, as if there’s a “memory leak” or failure to deallocate the large amount of memory used during deblending of the bright star’s wings.

I guess that I just wanted to report this and see if it’s something that’s known and/or being worked on and/or already fixed in more recent pipeline versions (I am hoping to transition all of my DECam-related LSST pipeline processing to Gen3 in the very near future). I suppose a related topic is whether there are some config options I could use to avoid these long run-time, high memory scenarios.

I see that there may be significant overlap between this post and Extreme memory usage during source deblending / measurement, so I will consult that as well, though I don’t believe that post touches on the possible memory leak.

Unfortunately the excessive memory usage is expected, as having a very large source that overlaps with a large number of other sources will hold the footprints of all of the sources in memory at the same time (this is true of both the single band and multi-band deblenders). This case is even worse as the catalog is extremely dense (most likely due to false detections in saturated regions). The relevant config options to skip problematic blends are SourceDeblendConfig.maxFootprintArea, SourceDeblendConfig.maxFootprintSize, SourceDeblendConfig.maxNumberOfPeaks(and similar options for the multi-band ScarletDeblendConfig). I would recommend going back to the images that you processed and see what the footprint area, linear size, and number of peaks are that gave you trouble and see if there is an optimal place to make those cuts.

As for the memory leak, how are you measuring memory usage? I know that with python it can be especially difficult to track memory usage, specifically memory leaks, because of the way that the garbage collector works. I’ve never had much luck tracking memory leaks in python with common tools like memory_profiler, but perhaps someone else with better knowledge can chime in.

Thanks a lot for the responses. Sorry for the slow response on my part…

I seem to have good luck in terms of reducing large numbers/blobs of spurious sources associated with artifacts using maxFootprintArea=3000. Including a maxFootprintSize constraint on top of this seems to make little difference until I get down to what seem like rather small values of maxFootprintSize (on the order a few dozen). Which leads me to ask: what are the units of these quantities? I’ve been assuming they’re (square) pixels.

I haven’t yet tried tuning maxNumberOfPeaks, as that wasn’t previously one of the parameters on my radar, but I will look into that suggestion as well. Thanks again!

I’m just checking in on unresolved topics here in the forum, to see if I can mark some posts as solutions – @ameisner or @fred3m, did the final question about the units of the quantities maxFootprintSize and maxFootprintArea get answered? Did tuning maxNumberOfPeaks turn out to be the right solution?

Yeah, I think the reason I hadn’t marked this as resolved was because of the units question. On my end, I still haven’t gotten around to trying maxNumberOfPeaks.