A spotlight post for the third_obs family (from the v1.5 runs).

In this family, we implemented a strategy with the goal of adding a third visit for fields which had already acquired a pair of visits earlier in the night, in the WFD area (only). The variation across the family is “how much time is used for third visits?” – the comparison point would be against ‘baseline_v1.5_10yrs’, which is a similar strategy (same survey footprint and weighting – this is a traditional WFD and survey extensions in GP/NES/SCP).

The amount of time between the earlier visits to the field and the third visit is not a factor in choosing where to observe – however, the standard basis function which drives visits toward the meridian (the m5 depth basis function) would tend to prefer visits to field which match the above criteria and are still relatively high in the sky – this means, in practice, the part of the sky that would get a third visit in the night would be that which was visible later in the night.

We can visualize this by looking at a night in a third_obs run which had a large number of third visits – third_obs_pt120v1.5_10yrs, night 654.

First: all of the visits obtained in the night. One of the aspects this illustrates is that we do sometimes observe parts of the sky more than twice, although most of the time we do not (and a lot, although not all, of the repeats are due to field overlaps – see “how many visits per night does a pointing receive?” and this Overlaps-NvisitsPerNight notebook). You can also see the DD field, the isolated dot. As an aside, a plot of the visits from the baseline survey on this same night looks very similar (it’s early in the survey). 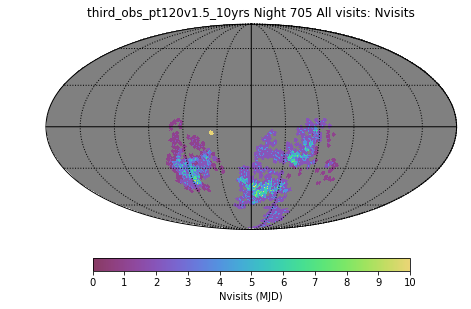 Then: the third visits from this night: (there were a total of 150, compared to 1011 visits throughout the night … on this particular night, there were 288 visits in u, 220 visits in g, 278 visits in r, 205 visits in i, and 20 visits in y … the moon was only 35% illuminated, or about 5 nights from new moon). So you can see they are in the later part of the night, at higher RA values. They are scheduled in a ‘blob’ in a similar fashion to earlier visits in the night outside of twilight. Some of these pointings are observed more than just once as well (giving us fourth or more visits per pointing) – this isn’t entirely unexpected in this run, given that we have 120 minutes devoted to obtaining thirds, but only a limited amount of sky will be desirable/available for this purpose. The runs with smaller amount of time (30 minutes or so) devoted to third visits show only single visits in the ‘third’ region. 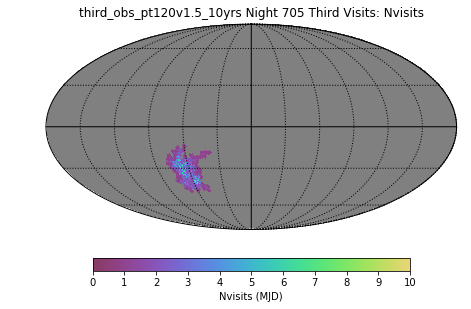 Now, back to the amount of time expected to be devoted ‘third’ visits in each night and how to translate this from the run name, along with a comparison to approximately how much time was actually devoted to the third visits in each night. The “Third” time column represents how much time was programmed towards third visits per night (in minutes), along with a translation of that time into an approximate expectation of the fraction of visits (%), assuming an average 8 hour night, 80% of time spent on WFD (we only programmed third visits in the WFD area), and an average 77% open-shutter efficiency. The ‘Frac thirds’ column reports the approximate fraction of WFD-region visits that were actually used for third visits.

Plotting this, for another view: 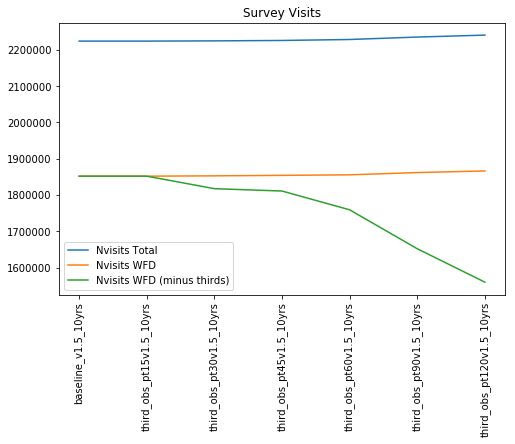 Generally speaking these behave as programmed – as more time is requested to be spent on ‘third’ visits, more time is used for this, and it roughly follows the fraction of time expected to be used for thirds. However, you can see a few nonlinearities, particularly with smaller fractions of time spent on thirds.

When there is only a small amount of third time programmed, the amount of time available before twilight is close to the amount of time typically used to cycle through a ‘blob’ (about 22 minutes to cover a blob once, 44 minutes to cover the blob twice to get pairs). The blobs executing in the main part of the night queue up their first round and then execute the follow-up pair visit without allowing interruption from these ‘third’ visits – so it becomes a matter of chance related to how long the usable night is, when standard pair blobs started executing, and how fast they finished, as to whether and how much time is available for third visits. Once the third visit blob starts executing, third visits will continue until morning twilight starts … but the amount of time actually available for this will vary somewhat, and when the time requested for thirds is small, this creates more ‘noise’ in how much is actually used. This explains why the 15, 30 and 45 minute thirds simulations all fall short of the amount of time requested for third visits (and thirds with only 15 minutes available actually fail to execute at all in a meaningful way).

So there are useful things with this family of runs – some parts of the sky will have boosted numbers of visits per night (particularly in the same filter). However, there are also some complications in the impacts these runs may have on metrics:

I think these runs also point out a major gap in our current science metric coverage. For static science, there’s little to no impact on re-observing some sky at the end of the night because the final depths at the end of the survey are unchanged. There is an impact on the number of transients that are detected, since we’re observing less total area in the night. The motivation for these runs however is that it would greatly help with transient classification, especially short time-scale transients. We need to do some work to better quantify the detection vs classification trade off that should be happening in these simulations.

Its great to have this post! I am going to look into the details asap but I have an immediate suggestion that it important to also consider the time gap between the visits in addition of how often it happens (best would be to measure the number of third obs that happen at Dt > something or the median Dt for Dt> something, which was the spirit of the PrestoColor to enhance classification)

What would your suggestion for “something”be here Fed? And is it looking for the Dt between visits in the same filter only?
Note the standard pair time is 22 minutes for these runs, so there will be a lot of repeat visits at and within 22 minutes, even without the third visit. We could just put the pair time in as “something” but it would be better to have a value more scientifically motivated.

Hi Lynne, the details of the minimum and maximum DT between observations in same and different filters are in the Presto Color paper (see also the COSEP paper Section 6.2)

TL;DR 4 hours is a good lower limit for images in the same filter (the upper limit is ~24 hours to balance requirements of rapid follow up and ability to determine shape changes even for faint transients);
within 30 min is great for images in different filters to get color.
Note that as we are discussing it now this is starting to resemble almost identically the metric we had written for the presto color white paper where we were counting observations that fell within DT1 in 2 filters and at least DT1 with the repeat filter.

The scientific justification is primarily the classification of transients as rapid-non rapid. And let me emphasize that if the second repeat filter observation is too close to the first one it does not aid in classification

From the Presto color:

These results lead us to the following considerations:
max(∆T1) — The two observations in different filters, separated by ∆T1, will be used to assess the color
of the transient. The fast transients are distinguished
mostly due to their ∆mag, but their high rate of change
in luminosity implies that only for small ∆T1 we can obtain true color information that would direct our follow-up strategy choices. Smaller values of ∆T1 — ∼30 minutes — are better to provide a true estimate of the intrinsic color (see subsection 4.2). However, values of
∆T1 of up to a few hours, while no longer sensitive to
the true “instantaneous” color of the transient, can still
provide some diagnostic power (e.g., of whether a given
transient is red or blue), and thus insight into the ongoing physical processes.

min(∆T2) — The two observations in a matching
filter, separated by ∆T2, will be used to assess the rate
of brightness change of the transient (the light curve
slope). While our classifier successfully separated SNe
Ia and II from fast transients in all ∆T1-∆T2 combinations, with accuracy exceeding 95%, disambiguation is
obviously harder for smaller ∆T2. This is intuitively obvious looking at Figure 4. For ∆T2 smaller than ∼ 4 hr
it is effectively impossible to distinguish fast transients
from “normal” ones due to the photometric uncertainties, since the classification is mostly driven by the rate
of change in luminosity. The uncertainty in ∆mag is
plotted for a typical SN Ia (0.3 magnitudes day−1
) as observed by LSST with the first measurement at g/r = 20,
22, 24 in the g or r band (1σ and 3σ are shown). At ∆T2
smaller than ∼ 4 hr nearly all fast transient observations
fall within the 1σ region of type Ia SNe for transients
g & 22.

max(∆T2) — We advocate for three observations
within the same night to trigger a follow-up campaign
and catch the early, extremely informative stages of a
transients evolution. In addition, there are general consideration on the visibility of a field within a night to
make: ∆T2 ∼ 4 hours means we are now observing a
field that moved 60◦ across the sky: if the first observations happened near zenith the field would now be at a
prohibitively high airmass.