All of the data from this program is public and available for anyone to use. Please contact @MelissaGraham for an advanced copy of the survey characterization paper, with any questions about how to access the data, or if you’d like to join the team and contribute to the proposal and observing at CTIO.

Publicly Available Data
The proprietary period is waived. All images are available in the NOIRLab archive under proposal identifiers 2021A-0113, 2021B-0149, 2022A-724693, and 2022B-762878 (P.I. M. L. Graham). Alerts for all sources detected in difference images are distributed to brokers. Lightcurves for 4413 high-quality candidates – including individual difference-image and nightly-epoch photometry – are available in the Version 2 release of the decam_ddf_tools repository.

Science Demonstration: Supernova Lightcurves
The main technical goals of this DDF program are to enrich the alert ecosystem and provide DDF-like training sets for photometric classification. The main science goals are to study faint and fast variables and transients (Galactic and extragalactic), and main-belt asteroids and trans-Neptunian objects in the Solar System. The figure below is an example of just nine random SN-like lightcurves of many that were identified from the “4413 high-quality publicly-available candidates” mentioned above. 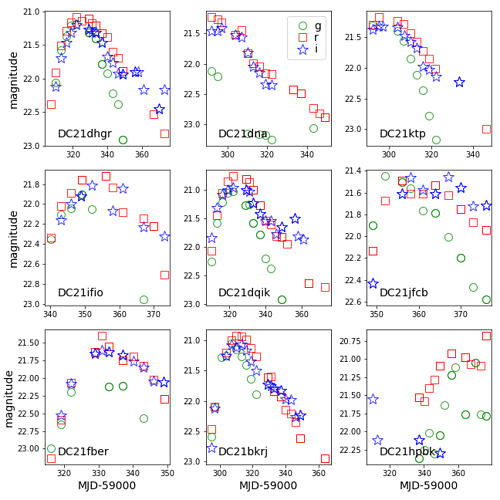 Very interesting and useful! Thanks for posting this information.
Was any microlensing event identified in the galactic fields?
I understand the program is ongoing for this current semester, right?
Are alerts broadcasted through the 7 brokers connected to Rubin?