RSP Explainer: What is the "Recommended" image?

When you use the Notebook Aspect of the RSP you are given the option of picking an image before you start in the JupyterHub screen that looks something like this: 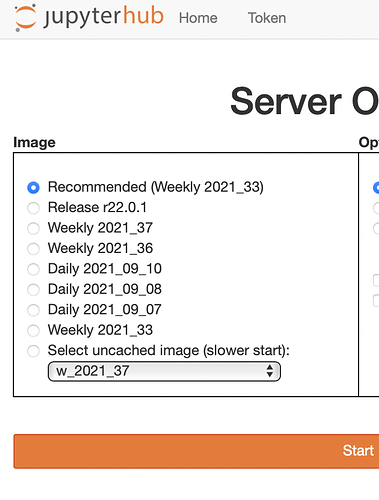 Unless you have a very specific reason to do otherwise, you should leave the default (Recommended) selection checked. But what is The Recommended (as you will often hear project staff refer to it)?

When you use the Notebook Aspect, everything you do happens inside a container [^1]. That container is based on a Docker image [^2] and the RSP menu pictured above is offering you a choice of which image you want the RSP to launch (aka “spawn”) on your behalf.

This “daily build” from the science pipelines is then used by the build system to make the RSP daily images by adding a whole bunch of RSP not-so-secret-sauce[^3], which is why you can’t necessarily run our RSP notebooks in a stock Jupyter environment.

The same process goes for other builds, including weekly builds (which have longer automated testing as part of their production) and the “official” builds (produced from Science Pipelines major releases).

How we promote the Recommended

The less frequent the release cycle, the more testing and verification we can do on it. Dailies have minimal post-build testing. Weeklies are more stable but are still considered “engineering” releases without official documentation. Official releases (like the current version 22.0) have a much more formal process including release notes, a metrics characterisation report and formal approval by the Data Management Change Control Board.

At the current stage of the project lifecycle (pre-first light), these official releases are far apart compared to the rate of development of new features and the rate of discovery and fixes of bugs. The RSP teams are in regular contact with the Science Pipelines, Middleware and Community Engagement teams to monitor the sweet spot between new capabilities and stability. When that balance tips towards the new capabilities, we select the latest weekly and do some additional (human) testing on it, and if all is well we “promote” it to Recommended.

What you see in the screenshot above is that the weekly build of the 33rd week of the year (weekly 2021_33 - i.e. mid August) is the current Recommended.

The options listed on that menu have one more thing that is special: since we think that these are the most likely images that project staff and early access users will be looking for, they have already been distributed (“pre-pulled”) on all the nodes of the RSP cluster. Since these images are very large (~ 16 GB), they take a while to be downloaded from the container repository to the cluster node that you will have landed on, which increases the start-up time you experience when starting (“spawning”) your RSP Notebook session. Behind the scenes a service makes sure that these images are already available on all the nodes to minimize start-up time.

While other images are available from the drop-down menu, these are not pre-pulled and take a long time to start, and the service may even time-out in some circumstances before that operation completes (which is a behaviour we are hoping to fix)[^4].

What does this mean for you

The Recommended is almost always the right option for you, which is why it is the default option in the menu. It is carefully selected to have the right balance between offering you new features and bug fixes while reducing the risk of you getting a release that is broken in some way, and it has reduced startup times from most other images.

You should generally not use other images unless there is a specific reason, such as being asked to test a bug fix you have reported in the latest daily or doing a reproducibility comparison with an official release.

As we move through operations and system stability, we expect that eventually the best option will be an official point release rather than a weekly build - but then that will be Recommended, so the advice to use Recommended will still apply.