I’m happy to announce the release of our v2.0 survey strategy simulations.

These simulations follow the SCOC Phase 1.0 recommendations (see PSTN-053) for an update to the previous baseline – this involves a notable update to the overall survey footprint, an expansion of the area on the sky which receives WFD-like numbers of visits (which now includes the galactic bulge and the Magellanic Clouds), and the addition of a two-region rolling cadence to the majority of the sky. This baseline survey strategy is then held as the ‘background’ against which we consider further options on survey strategy in various families. These families include:

We have a notebook - SummaryInfo_v2.0 - to walk through more details about each of these families, as well as introduce a handy json file you can use to further identify simulations (this is used to create that SummaryInfo_v2.0 notebook!).

The runs can be downloaded at either:
https://epyc.astro.washington.edu/~lynnej/opsim_downloads/fbs_2.0/
(note the tar file which can be used to download all runs at once at https://epyc.astro.washington.edu/~lynnej/opsim_downloads/fbs_2.0/opsim_v2.0.tar.gz)
or https://lsst.ncsa.illinois.edu/sim-data/sims_featureScheduler_runs2.0/

The MAF metric outputs are available here: astro-lsst-01.astro.washington.edu:8080/
and a CSV file containing the summary metric information for each of these runs is available here* [this will be updated when the remainder of the solar system metrics are completed!].

Datalab now has these runs available as well!
The v2.0 simulations are available at /sims_maf/fbs_2.0 — please make sure you are using the LSST-2021.10.13 py3 kernel on Datalab in order to access rubin_sim.
Here’s a little screenshot showing some short-cuts to finding particular runs that may be helpful. 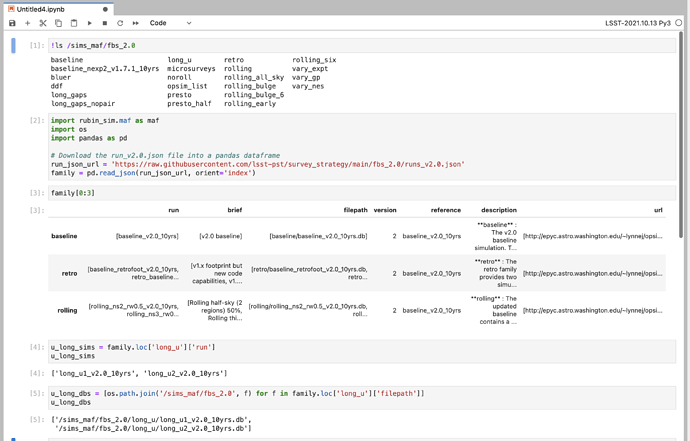