One of the requests from the SAC was to evaluate the effect of confining u band visits to within a few days of new moon. The motivation behind this was multi-fold:

Other relevant requirements include

Executive Summary:
In FBS 1.3, we will redo these runs with updates to the u band DD sequences, add a run with even tighter constraints in u band availability around new moon, and test adding higher priority to u band visits when available (particularly in areas where the coadded depth is lagging).
The FBS 1.2 runs show that we should use a smaller default value for when to swap filters (current default is 60% illumination; either 15% or 30% illumination would be a better default).

Details:
A very rough back-of-the-envelope estimate suggests that reaching DD depths of u=28.3 for 5 DD fields and 26.1 visits per point of the sky across the equivalent of the WFD, would require a total of about 144 nights (if a night is 10 hours long), so constraining u band visits more tightly to new moon should be possible (even if the u band filter is only available for a few nights around new moon).

With the FBS 1.2 set of runs, we have addressed the SAC request with a series of 3 simulations where the u band filter was swapped with z band at different levels of lunar illumination (equivalent to moon phase in this case, with ‘phase’ == ‘percent of lunar surface illuminated’, ranging between 0-100). These runs include filter swaps at 15%, 30% and 60% lunar illumination, corresponding to 3.5 (i.e. 3 or 4), 5, and 8 days from new moon. 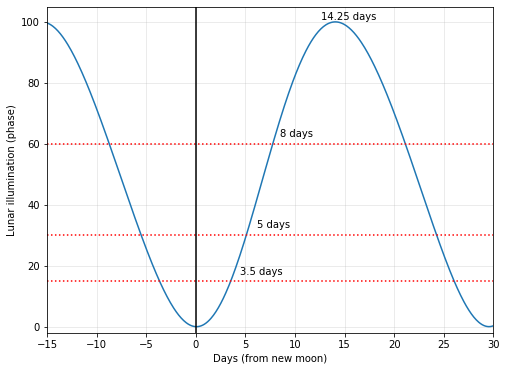 None of these runs saturate the new moon time with u band visits (and you wouldn’t expect this, as twilight will still have non-u band visits), although there is a significantly higher fraction of visits in u band when the availability is limited to +/- 3-4 days around new moon. 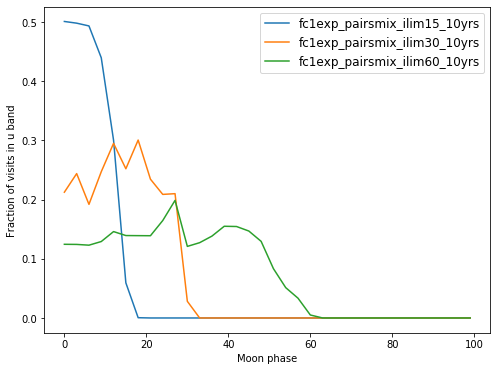 The distribution of individual image depths doesn’t change significantly between these runs. The scheduler appears to be doing a good job at taking u band images under appropriate conditions. Thus the first concern - to constrain visits to near new moon to improve the visit depth - is already taken care of through the scheduler basis functions. 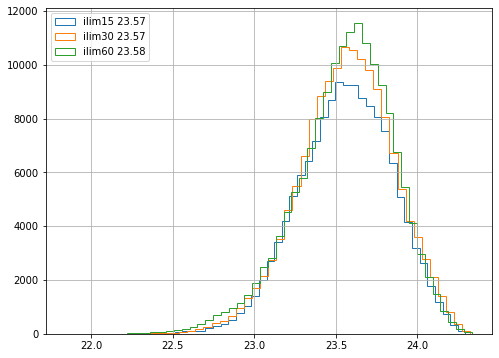 The second concern - clustering the u band visits to improve the cadence of grizy - is slightly more complicated to evaluate. The obvious problem is that in these runs, u band is being swapped with z band, so when u is in the telescope for longer there are necessarily longer gaps in z band. Pushing these gaps to 16 nights is likely problematic given the constraints stated in the DESC WFD white paper (maximum night gaps of 14 nights). There is a complementary difference in the spacing of the u band visits, however the u band does not have as strong constraints on the inter-night visit gaps. The distribution of visits in other filters is similar across these runs.

Looking at the u band visits and coadded depth across the sky**, we see that the runs with a shorter availability for the u filter resulted in a patchier distribution of visits and coadded depth. The number of visits were fewer in the fields overhead during summer (this is the area ‘left’ of the galactic plane and ‘south’ of the NES), although generally hit the 56 visit requirement - the coadded depth was patchier and often came a bit short of the desired 26.1 coadded magnitude. With a longer time available to take u band visits, the coadded depth improved - with almost 40% more area covered to the desired depth (13k vs. 9k sq deg). This suggests that we should try running the simulator to prefer u band visits a bit more strongly, particularly when the available time is more limited. 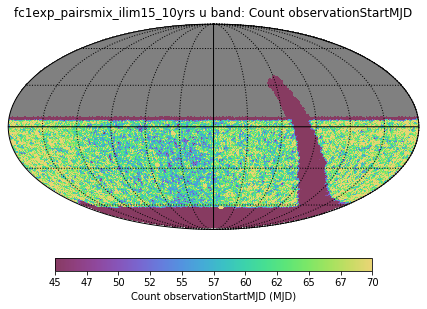 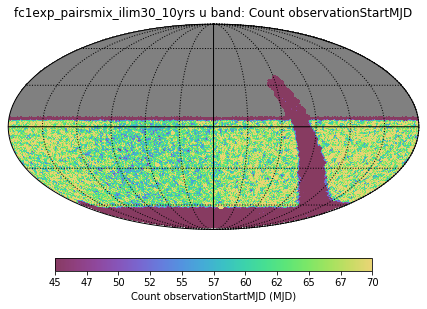 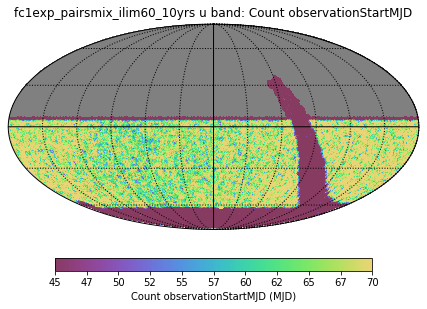 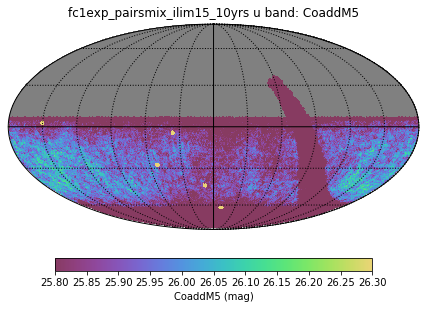 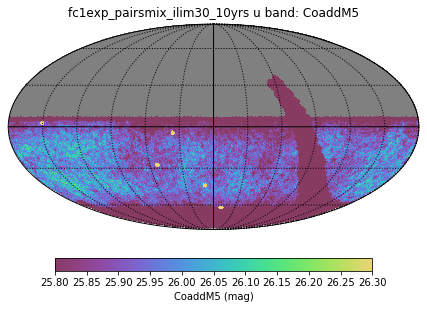 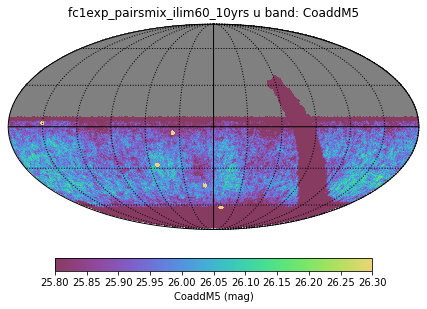 Looking at the u band visits for the DD fields exposed a small ‘feature’ in the DD sequences that was limiting the overall number of visits too strongly. This can (also) be seen in the way that some DD fields have many fewer u band visits than other fields. We will reconfigure the u band DD sequences so that the final coadded depth is more uniform between fields and deeper overall (likely by adjusting the number of visits in u band in each sequence, but also by relaxing the inter-night revisit gap requirement on the DD scripted survey).

FYI: The “Delta Night” histograms are created as follows:

Thus one of these DeltaNight histograms captures a view of all of the gaps between visits at all points in the sky (although it must sacrifice the spatial distribution of that information in the plot).
For these plots in particular, I removed DD fields and only included visits in the given filter and between -62 < dec < 2 (so this does include the galactic plane region, but not fields far north or south).

Thanks for this careful analysis. Very interesting to see that the depth of the u-band co-adds doesn’t improve when tighter constraints are placed on the illumination.

As the coordinator of the TVS TDE subgroup, I’d like to point out that a cut of 15% illumination will have a large impact for science of transients that are blue. Namely TDEs, but also young SNe, and young kilonovae. I think that the statement “the u band does not have as strong constraints on the inter-night visit gaps”, is perhaps a bit to definitive. This something we’ll have to test with metrics/FOMs for different types of transients. For example, a 15% illumination constraint likely means we can only detect blue transients around new moon and we won’t be able to measure their color because no other filters will be used around this time. Even if you favorite transient is not blue, having a non-detection in the u-band is useful for accurate photometric typing (eg, to reduce bias in SN Ia samples for cosmology).

To conclude, based on the very useful plots shown in this post, I would argue that 60% illumination should be the default. It gives better u-band coverage at no cost to the co-add depth. In the end, the impact on the deltaNight gaps will have to be tested with simulations of different transients to compute a FOM.

Hi @sjoert thanks for bringing these issues up! I was looking through the white papers to see if I could find more constraints on u band inter-night visit timing, but wasn’t finding anything beyond Gezari et al (with the 8 band rolling cadence for TDEs … which definitely is aiming for a higher overall cadence as well, although I also didn’t find a concrete request about the timing).

We don’t have good metrics yet for TDEs, although we have a kilonova and SN lightcurve from the PLAsTiCCs challenge we can use to evaluate the surveys, so hopefully we have some at least rudimentary metrics here (although the kilonova one in particular needs some help - @iandreoni should be able to help with this in a few weeks).

Having more metrics to evaluate these issues would be helpful, especially because there are some other points here too – currently u band is not required to be obtained in pairs, so much of the time this is likely single visits per night rather than paired with another filter on the same night. Even with constraining u band visits to only a few days around new moon, we would have enough time over the lifetime of the survey to take u band along with other filters (see that only 50% of the visits are in u even with 15% illumination filter changes). So you could still have colors, if we set up the survey a bit differently (i.e. to take u band visits in pairs with g? r?). This might mean going to a bit longer than 15% illumination, given that we also need more visits in u band in the DD fields, but it still doesn’t mean we’d have to go to 60%.

The timing of the u band visits did not seem terribly important from the SN aspects of the DESC white papers, and they were highly concerned about the internight gaps for all of the griz visits (and a swap at 60% means much longer gaps in z band) – is this consistent with what you understand from the TVS group or is there a different concern (for SN in particular)? We should definitely look at what the change in the filter swap time does to the SN detection, as well as the internight gap value.

Thank for the reply! We are currently working on TDE metrics (@fed and her student have some first results – let’s discuss those in the other thread).

Very good to know to know there’s should always be time to obtain u band outside new moon. It would indeed be very helpful to pair those of u band observations with g or r. If it’s still helpful I could make the requirements of our TDE white paper more specific (I was second author on the paper you mentioned).

My understanding is that for SN science within TVS u band is less important for detection, but more important for classification and characterization (but perhaps @rstreet can comment more). These things are harder to catch into a simple metric, but we can make some approximations.

One last thing to keep in mind, very few previous transients surveys have used u band (only SDSS Stripe 82?). So that could perhaps lead to some bias in setting the requirements from LSST. But with these simulations and the different metrics we should be able to find an optimal solution.

This is a pretty old analysis at this point, but we did repeat it for FBS 1.3 with a variety of filter load times.
The evaluation of that is presented here: https://github.com/lsst-pst/survey_strategy/blob/master/fbs_1.3/u%20band%20swap.ipynb

What we saw and heard from the community was this:

We found that increasing the amount of time that u band was available resulted in more even coverage around the sky, without decreasing the individual image or coadded u band depth (because we still only use the u band when the sky is dark, which may only be a portion of the night).
We also removed one of the constraints coming from DDF sequences – instead of not taking DDF sequences if all of grizy were available, we now take DDF sequences using whatever are the available filters. This stops big interruptions in the DDF sequences due to filter availability.

After that, we found best time to swap u band into and out of the filter holder is at about 40% lunar illumination – about +/-6 days around new moon.

We also modified the u band visit acquisition so that now u band visits are acquired as part of a pair, with the alternating visit in g or r band.